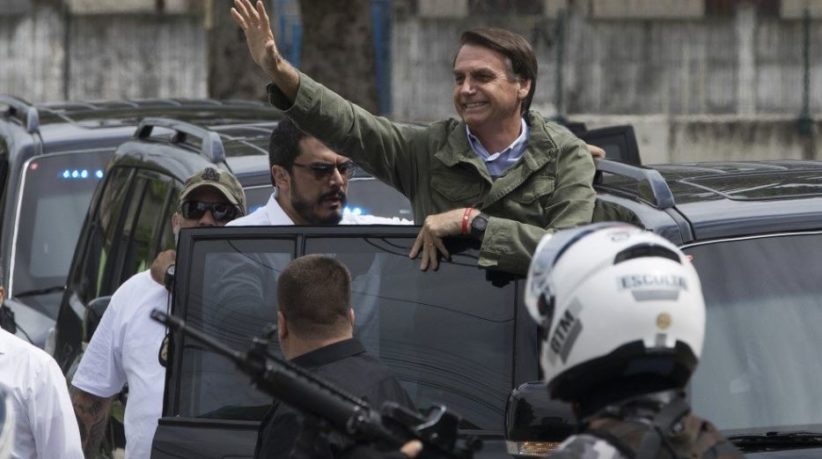 Following his Sunday evening victory, president-elect Jair Bolsonaro used a Facebook live broadcast to thank God, the Brazilian people and the doctors who saved his life after he was stabbed at a September campaign rally, for his victory in this year’s general elections.

Since Sunday, Bolsonaro has also taken the opportunity to make some announcements regarding his presidential cabinet. He chose to give his first interview as president-elect with news programme Record TV – owned by Brazil’s largest evangelical church – which he has previously praised for what he believes to be its “neutral journalism.”

Speaking to the Record journalist, Bolsonaro outlined his intentions to downsize his presidential cabinet, significantly reducing the number of ministers in a bid to combat “inefficiency” and “corruption.”

With two cabinet members already confirmed, including the likes of retired army general Augusto Heleno as his defence minister, as well as ex-banker Paulo Guedes who has long-since been named Bolsonaro’s future economy minister, the president-elect used the Record interview to hint at the profiles of a few more ministers.

Without making any confirmations, Bolsonaro spoke of member of Chamber of Deputies Onyx Lorenzoni – who is in the running for Chief of Staff – as well as astronaut Marcos Pontes, who is on course to become his next minister of science and technology.

Bolsonaro also used the interview to clear up rumours surrounding the potential appointment of Sérgio Moro, the judge in charge of the Operation Car Wash corruption investigation and the man who also ensured the imprisonment of ex-President Lula da Silva, originally due to participate in this year’s elections. Bolsonaro claimed that he planned to “speak to him” about making him the minister of justice in his cabinet.

On the topic of economics, Bolsonaro vowed to reduce bureaucracy in order to make the lives of entrepreneurs and businessmen easier. In reference to his economy minister Guedes’ previous comment on South American trade bloc Mercosul, who claimed it would “not be a priority in the future government,” Bolsonaro agreed, confirming that it would not be given initial importance.

When asked whether he intended to govern as a president for minorities as well as the rest of the population, Bolsonaro returned the question, “I’d like to know … what’s a minority? What are the rights of these ‘minorities’?”

“We’re all the same. There’s no difference between me and you. It doesn’t matter what the colour of your skin is, your sexual preference, the region where you were born, your gender. We’re all equal … We can’t take certain minorities and think they have super powers and are different from the others,” he said.

Finally, Bolsonaro’s interviewer asked the president-elect to clear up his policies on arms handling. He responded by outlining that the results of a 2015 survey had indicated two thirds of the Brazilian population had declared they would like to have the right to buy weapons. “I want to respect the wishes of the people,” he said.

“We are at war,” Bolsonaro warned, referring to the period of violence that Brazil is currently experiencing, which is why the president-elect explained that he intends to allow for more flexibility when it comes to gun laws, insisting that it is time to abandon the philosophy that Brazil would be safer without weapons.

“If there were three or four armed people here now, I’d be certain that some nutter wouldn’t be able to come in through that door and do something bad,” the president-elect told his interviewer.

“That newspaper is over,” Bolsonaro on Folha de São Paulo