Brazilians take to the streets to defend democracy 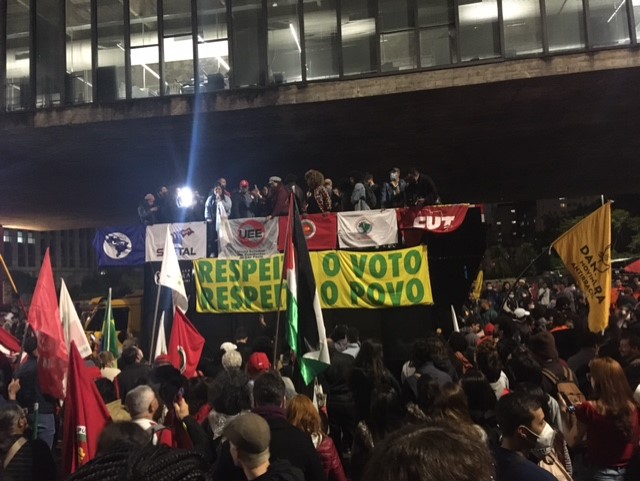 A wave of protests in defense of democracy shook Brazil this Thursday. Protesters called on the government to uphold democratic elections amid fears that President Jair Bolonaro may refuse to relinquish control if he loses to his opponent Luiz Inácio Lula da Silva.

All protests called for the support of Brazilian democratic institutions, protections for upcoming presidential elections on October 2, and the general rule of law.

Brazilian flags, banners and posters calling for President Bolsonaro to “get out” of power and for the defense of democracy in the country could be seen throughout the protests.

Calling for the president’s removal is a response to the recurrent attacks that Mr. Bolsonaro has made in recent days on the country’s electoral system, especially on electronic voting machines.

Without presenting any evidence or technical basis, Mr. Bolsonaro has repeatedly questioned the safety and reliability of the electronic ballot system.

Echoing the rhetoric of former United States President Donald Trump ahead of the 2020 elections in which he lost to Joe Biden, Mr. Bolsonaro has said that Brazil’s voting system can be invaded by hackers with the potential to change the outcome of the elections.

All of the president’s arguments have been exhaustively refuted by the technical area of the Superior Electoral Court,The Superior Electoral Court is the highest body of the Electoral Justice in Brazil, responsible for organizing, inspecting and ensuring that all stages of the electoral process take place in a safe and transparent manner. In Brazil, it is the Electoral Justice that counts the votes and seals the results of the elections.

On several occasions, these professionals detailed the operation of electronic voting machines, which are not connected to the internet or any other network. The data saved on the equipment is stored on USB drives and forwarded to the electoral bodies of each city for the vote counting.

To provide more confidence in the process, last September the Superior Electoral Court created a transparency commission composed of specialists in information technology, university professors, jurists, members of the federal government and even members of the Brazilian Armed Forces.

This working group’s main objective is to inspect and suggest improvements that increase the security of the voting system. So far the group has not identified any irregularities.

Despite the rigorous efforts by authorities to instil trust in the electoral process, President Bolsonaro maintains his discourse about the possibility of electoral fraud and flirts with threats that could compromise the election.

In all polls released so far, President Bolsonaro appears in the second position of voting intentions. Former President Luiz Inácio Lula da Silva leads the run, 18 points ahead according to the last Institue Datafolha pool, released by the end of July.

Signatories of the letter in defense of democracy fear that Brazil could be experiencing a situation similar to the elections in the U.S. in 2020, where President Trump sowed doubt about the security of voting systems, leading his supporters to storm the U.S. Capitol on January 6 to stop Congress from certifying the election.