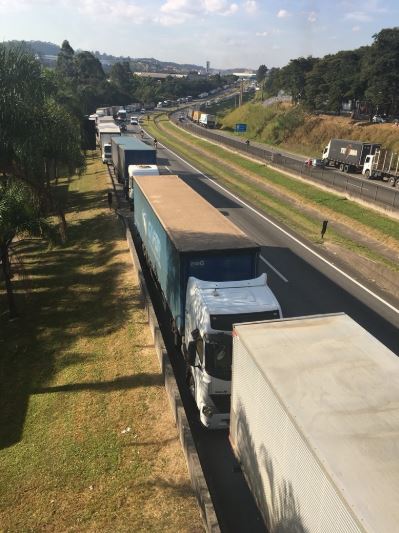 Brazilian lorry drivers have achieved exactly what they’ve asked for: a reduction in diesel prices by 10%, monthly price readjustments, exemption from tolls and a fuel price chart that will enable them to predict their finances. However, nine days after protests initially began, protesters continue to wreak havoc across Brazil’s road network and the effects of the strikes are still being felt throughout the country.

Union leaders have urged protesters to accept President Temer’s latest deal, announced on Friday, which promised to tend to the drivers’ demands. However, when police officers began attempting to remove demonstrators with force, as Temer warned, drivers have continued to use their vehicles to block roads, bringing the entire country to its knees.

The main reason for protests has been over the surge in diesel costs, which have increased from 3.36 reais per litre to 3.6 reais just before the strike. Mid-way through the protests, diesel prices hit a record high of 3.8 reais per litre, according to Al Jazeera.

Aside from the petrol stations’ lack of fuel, the reduced transport links have affected various other services in the country. For example, blood banks currently have reduced resources and analysts predict negative impacts on the informal labour market.

It seems, however, that public and private transport services have just enough resources to get by for the time being. According to the Mayor of São Paulo, Bruno Covas, the city’s public transport system will be able to survive for the next few days, as buses have enough fuel to see them through today and tomorrow.

With regards to air travel, international flights at Belo Horizonte airport in the state of Minas Gerais are operating normally again after over 10 national airports were left without sufficient fuel to operate last week.

This week, federal security forces have begun to crackdown on protesters and carry out the actions President Temer warned would take place. Just today, seven protesters were arrested with force in the northeastern state of Maranhão.

The confusion and panic is also opening up space for criminals to take advantage of the vulnerable population. At around 4pm today, it was reported that a Whatsapp scandal had thrown another spanner into the works, sending around a false link advertising which petrol stations had fuel in São Paulo. In less than 24 hours, 60,000 users became victims of fraud.

What is certain is that citizens will not be the only ones to suffer from the crisis caused by lorry drivers’ protests. As the truckers planned, nine days of demonstrations (and counting) will cost the Brazilian state a considerable amount of money: up to $27 billion reais, predict Estadão.

This Sunday, President Temer took to social media to announce that there is nothing more his government can do. Reaffirming his intentions to meet lorry drivers’ demands and readiness to compromise, he tweeted, “throughout the entirety of this week, my government has been open to dialogue.” For now, however, the population awaits in hope that lorry drivers will cease their protest so that the country can return to normal.