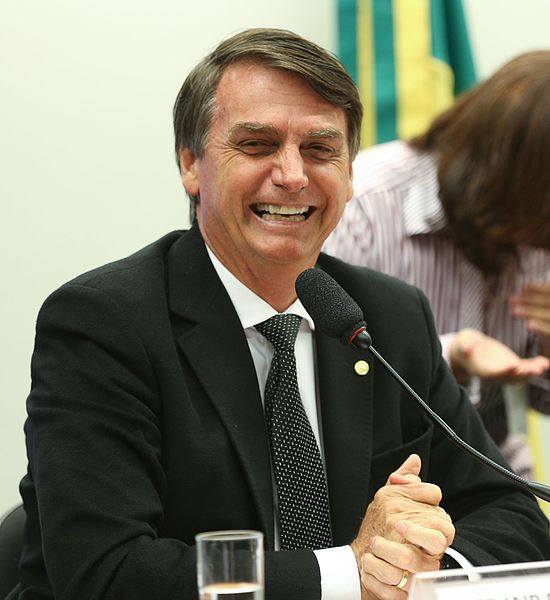 The evidence of Friday’s charges came from a speech that Bolsonaro gave in April of last year, at Rio de Janeiro’s Clube Hebraica. Despite the protesters’ discontent, Bolsonaro spoke for over an hour at the Brazilian-Jewish social and recreational club, in an event that had previously been cancelled due to the 2,600 signatures objecting to it taking place.

“If I become President, not one centimetre of land will be marked out for indigenous reserves or quilombola (settlements founded by African slaves)”, he declared. “I’ve been to a quilombo”, he said, “the Afro descendants there do nothing… even as breeders, I don’t think they’re any use to us anymore.”

He also gave his opinion on women, referring to his own family as an example, “I have five children. Four are men, when it came to the fifth, I was flagging a bit and out came a woman.”

Detailing further plans for his possible presidency, he vowed “no money will be spent on NGOs.”. “If it were up to me, all citizens would have a firearm at home,” he added. On the topic of immigration, he expressed equally hard-line views, stating “we can’t open our doors to everyone.”

Some of Bolsonaro’s previous homophobic comments include remarks such as “if I see two men kissing in the street, I’ll hit them” and “us, the people, Brazilian society, we don’t like homosexuals”.

He has previously been fined $50 thousand reais for his racist views by judge Frana Elizabeth Mendes, to which he objected, claiming he was protected by freedom of expression. This time, he could face a penalty of up to 400 thousand reais and up to three years in prison, which could perhaps affect his candidacy in the upcoming October presidential elections. This, however, is unlikely. As members of Congress, they may only be tried by the Supreme Court, whose large backlog of cases may prevent the case from appearing before October.

Bolsonaro’s son, Eduardo Bolsonaro, is also currently being investigated for threatening remarks he made towards journalist Patrícia Lélis. These were sent using an app called Telegram, which allows messages to self-destruct after 5 minutes. Bolsonaro’s son had chosen to activate the automatic delete function. However, upon investigation, it became clear that he had said to the journalist, who he also called a “whore” and a “vagabond”, “if you say one more thing, I will end your life.”. This was then followed by another, more threatening remark: “one more word and I will personally go after you”. As a result, therefore, Bolsonaro’s son is also facing up to six months in prison, which could be served inside or outside of a penal facility.

The current Brazilian President also faces a separate case for claiming, both in court and to a newspaper, that opposition Workers’ Party member Maria do Rosário “didn’t deserve to be raped” because she was “too ugly”.

Known for his extremely conservative opinions, Mr. Bolsonaro has previously been called homophobic, racist, sexist and has been compared to Donald Trump by media outlets, such as French newspaper Le Monde and The Washington Post.  At this stage, his popularity in Brazil is second only to the recently imprisoned former President Lula.

What will Lula’s imprisonment mean for October’s presidential elections?