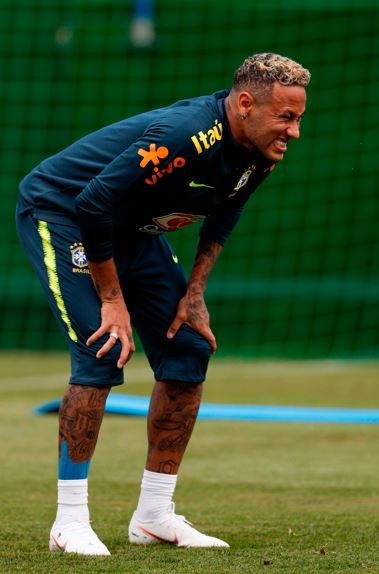 Brazil’s star player Neymar da Silva Santos Júnior has limped out of training today complaining of ankle pains, ahead of Brazil’s next group stage match against Costa Rica, which will take place this Friday 22nd June.

After being fouled 10 times in this Sunday’s match against Switzerland, in which Brazil’s selection drew 1-1, medics ruled him out of a full training schedule given his recently operated foot, which he broke in a February match against Marseille whilst playing for Paris Saint-Germain.

“Neymar complained of ankle pains,” said Brazil medic Rodrigo Lasmar, via Twitter, “as a direct result of the amount of fouls he suffered against Switzerland. As training was restorative for team members, he was sent to physiotherapy. He will stay there today and tomorrow morning, and will train tomorrow afternoon.”

Naturally, his new pains have fans worried, after he missed the second half of the European Cup season recovering from an injury.

Following Sunday’s draw, there seems to be increasing amounts of pressure upon Neymar to ensure a victory for the team this Friday against Costa Rica.

Even ex-President Lula da Silva, who is currently in jail on corruption charges, indirectly criticised the team’s average performance.

“The first week of the World Cup proves Germany is not unbeatable and, among the top players, only Cristiano Ronaldo proved his value,” he wrote, in comments read out by a reporter on the ex-president’s Workers’ Party TV on Monday.

Ahead of Friday’s match against Costa Rica, the former President warned the team, “Be careful, because we all know one day the little David can defeat the giant Goliath.”