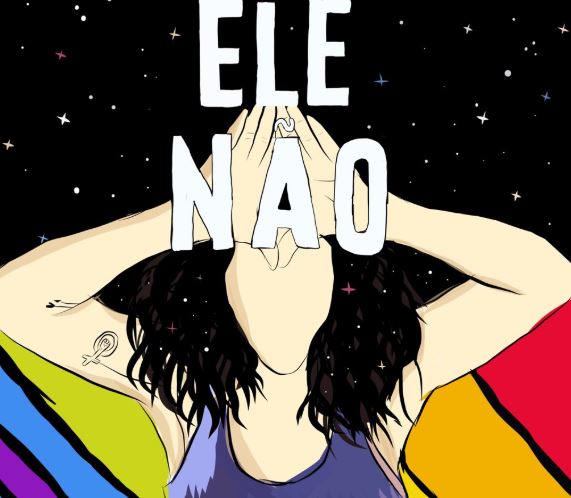 Giselle Lauro* is a 28-year-old Brazilian journalist who has changed her Facebook profile picture to incorporate the hashtag #EleNão (#NotHim) in protest of far-right presidential candidate Jair Bolsonaro.

She is one of the millions of women – including public figures and celebrities – leading the latest phase of the social media campaign against Bolsonaro, the man they believe to be a discriminatory politician who stands a high chance of becoming president of their country.

These photo filters have arrived after the group ‘Women United Against Bolsonaro,’ registered on the same social network, was hacked and temporarily shut down at the start of this week.  Before the cyber-attack, in which the group’s name was changed to ‘Women With Bolsonaro,’ the group had grown to around 2 million followers.

Despite surviving a knife attack during a campaign rally in Minas Gerais earlier this month, Bolsonaro remains this election’s most popular candidate, registering 28% popularity in the latest IBOPE survey.

The PSL (Social Liberal Party) candidate, who has been a member of Brazil’s Chamber of Deputies since 1991, has a reputation for his extremist views on minority groups such as women, Afro-Brazilians, indigenous and LGBTQ communities, as well as his staunch defence of the country’s military dictatorship.

His supporters see the politician as a last-resort source of hope who would be able to provide a radical solution to the country’s social, political and financial woes, and they dismiss his controversial remarks, arguing that media manipulation has placed them out of context.

These opinions, however, have also earned him a strong network of opposition, which is currently being led primarily by women. Outraged by sexist remarks Bolsonaro has made over his career, which include accusing women of being ignorant, vagabonds and unworthy of being raped, the women of Brazil have decided to speak out.

“#NotHim is a means created by part of the population to try and avoid the rise to power of somebody who represents an enormous setback for the country,” said journalist Lauro, in conversation with Brazil Reports.

“It is a non-partisan movement that has received commitment from voters with different political ideologies for the sole reason of having a president who, in his discourse, uses arguments based on violence, disrespect, oppression of minorities and curtailing individual rights,” she explained.

“It is worrying to think that the biggest leader of Brazil could be someone who offends and belittles homosexuals and women while also praising torture that happened during the military dictatorship. Someone who reinforces a discourse that oppresses the marginalised population and doesn’t realise that we live an extremely diverse country. Someone who, despite being a minister for so many years, is completely unprepared to deal with the social and economic necessities of the country.”

It is worth noting, nonetheless, that Bolsonaro is not lacking in female support. According to reports by The Guardian, he is backed by 17% of female voters, as well as by 32% of men.

In fact, in response to groups of female opposition, some women have come forward on social media using the hashtag #MulheresComBolsonaro (#WomenWithBolsonaro) and there are already several Facebook groups under this name, some with over 30,000 followers. An Instagram account under the name of @Bolsolindas also features posts with captions such as “For a better, safer and more prosperous Brazil, Bolsonaro #YesHim.”

Affectionately known as ‘mito’ by his supporters, which translates to ‘legend,’ Bolsonaro has been the reason for demonstrations of encouragement whilst he recovers in hospital.

With women constituting just over half of the population’s electorate, however, it remains to be seen whether the viral online opposition will mobilise enough to affect the first round of voting on October 7.

*Giselle’s name has been altered for confidentiality reasons.

How will this year’s elections impact upon Brazil’s economy?