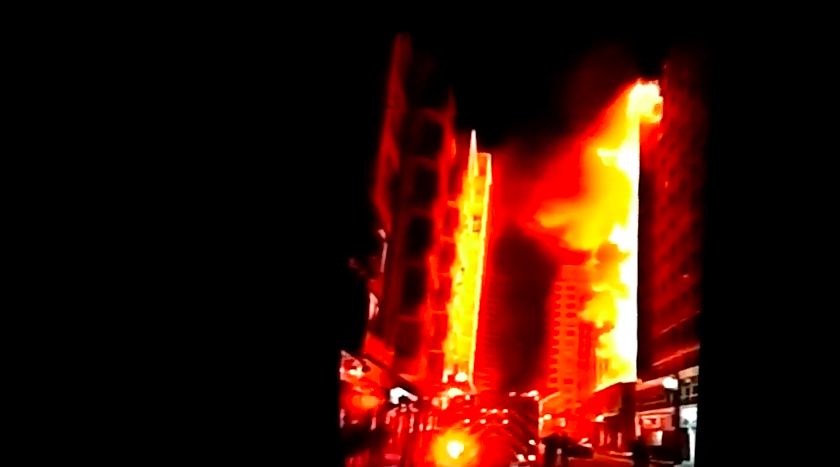 A 24-floor skyscraper located in São Paulo’s city centre has collapsed after catching fire in the early hours of yesterday morning.

Firefighters told Veja that it was likely that the fire started around 1.30 a.m. on the fifth floor. The building eventually collapsed at around 3 a.m. It is not yet known what caused the fire, but neighbouring buildings were evacuated and one building also caught fire, although it is not in danger of collapsing.

State Civil Defence services have been at the scene registering possible families that could have been inside the building the moment it caught fire.

Witnesses say that windows were breaking and the fire spread rapidly throughout the floors. “I was working when I heard various people shouting and noises of glass falling. When I went to see what it was, the streets, which had been deserted, were full of people in despair,” said Flávio Gabia, a receptionist at the Largo do Paissandu hotel.

Other nearby residents managed to capture the moment the building collapsed, taking to social media to post the news.

Firefighters are still looking for survivors amongst the rubble and one person has been confirmed as dead. Marcos Palumbo, spokesperson for the body of firefighters, told Agência Brasil that the search was still going on.

“The debris is still at a high temperature, we are cooling it down,” he told the agency. “The dogs are searching and trying to find victims. We are not going to use machines to remove the debris so as to not hurt possible survivors.”

According to Agência Brasil, a previous building assessment had raised numerous concerns such as un-removed waste, combustible materials and blocked fire escapes, which were reported to the authorities. Despite this, the city council confirmed that there were 92 families – or 248 people – still living in the building.

He also stated that there are 70 buildings in a similar state to the one that collapsed this morning, which alerted the city council to call various meetings with the residents, alerting them of the possible risks.