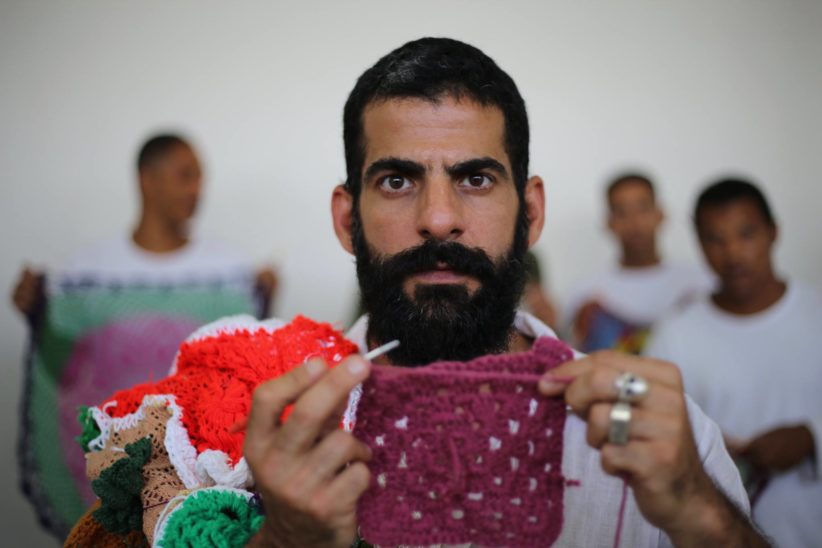 Stuck in overcrowded cells with decaying facilities and under threat of violence: the reality of inmates in Brazil’s hopelessly over strained prisons hardly sounds like an artist’s retreat. Yet a creative initiative that started with crotchet lessons gives prisoners a stitch of hope and empowerment – and the fashion world a surprise.

“When I crotchet, I feel free”, says an inmate in a video shown just before the models hit the runway in this year’s São Paulo Fashion Week (SPFW) wearing a line of crotchet outfits, manufactured behind the bars of one of Brazil’s many desolate prisons.

Projeto Ponto Firme, which translates in English to ‘firm stitch’ or ‘firm place’ project, was founded in 2015 through an unusual collaboration between a Brazilian fashion designer, Gustavo Silvestre, and the director of a prison educational program, Igor Rocha.

The idea was not only to give the inmates a new practical skill, but to bring hope, empower and inspire, says Rocha. Over 100 inmates have since gone through the crotchet workshops held every Wednesday in Adriano Marrey prison just outside of São Paulo and the waiting list is full.

Prior to SPFW, an event impossible for the ‘designers’ themselves to attend, a fashion show organized within the decaying prison walls made news in Vice magazine. Reproductions in crotchet of their own prison dress – beige pants and white shirts – but also quirky and colourful dresses, ponchos and shirts containing allusions to their daily struggles with slogans such as ‘God is fair” or ‘Freedom for all’, were seen on display before the proud and emotional eyes of imprisoned delinquents.

“The collection is sometimes melancholy but full of hope and ideas”, commented the Brazilian edition of fashion magazine Elle.

Amidst the prison riots Brazil has experienced throughout its recent history, Projeto Ponto Firme indeed is unusual news for a country where the prison system is as unstable. While individual initiatives attempt to improve the situation with an admirable dedication, they cannot shield the overall disastrous conditions that prison inmates face in Brazil.

The Government crackdown on violence and gang-related crime is leading prison occupancy to soar. According to Human Rights Watch and BBC, the number of Brazil’s detainees has dramatically increased over the last years, from around 620,000 in 2014 to over 725,000 just three years later. International observers deem the system near a state of collapse.

An overburdened judicial system, deteriorating facilities and a rise in gang violence add to the crisis that Brazil’s prisons face. Killings are rising, and 372 inmates were murdered in prison in 2016, BBC reports.

Since the fallout between the two main prison gangs, First Capital Command (PCC) and Rio de Janeiro’s Red Command, gang warfare has become a key concern in Brazil. In early 2017, around 60 inmates died in a bloody massacre at a prison in Manaus, in the state of Amazonas. The riot was sparked by drug gangs and lasted a total of 17 hours, labelled “the biggest prison massacre in the state’s history” by Amazonas’ Public Security Secretary.

Incidents like these are sadly continuing, and earlier this year 21 people died whilst attempting to break out of a prison near Belém, in the Northeastern state of Pará.

Related: 21 dead in attempt to escape from Belém prison complex

Stuck in these desperate conditions, initiatives that give access to craft skills, allow creative expression or rely on other form of art are often driven by empathy that many share with those behind bars.

In fact, fashion made in prison seems to be internationally en Vogue, even beyond Brazil.

In Denmark, a duo of fashion designers and social entrepreneurs just launched a fashion label that employs 15 women inmates of a prison in Cuszco, Peru. Launched only last year, their brand Carcel with a line of high-end alpaca wool sweaters claims to give prisoners is a fair wage, paid in cash to their families.

“There has been production in prisons for a long time, but I think what differentiates us (…)  is good wage”, says Carcel’s co-founder Veronica D’Souza.

However, not all stitching from prison is a social project to benefit inmates. Over the years, prisoners have been repeatedly used as a form of cheap labour around the world, despite the fact many have deemed the practice unethical.

In 2012, furniture giant IKEA was forced to publicly apologize after revelations of using forced prison labour in what was then East Germany (officially German Democratic Republic) in the 1970s and 80s hit the media.

Similarly, reports confirmed that global fashion brand Victoria’s Secret used prison inmates to manufacture its lingerie through a sub-contractor that directly worked with US prisons in the early 1990s – an episode that might have given inspiration to an analogical plot in the pop-culture prison Netflix series ‘Orange is the New Black‘.

For the prisoners of Adriano Marrey penitentiary, the crotchet project has become a sudden source of hope in what is, for many, a bleak reality. For the Brazilian government, it may be a reminder that the proverbial ‘stitch in time’ could save lives.