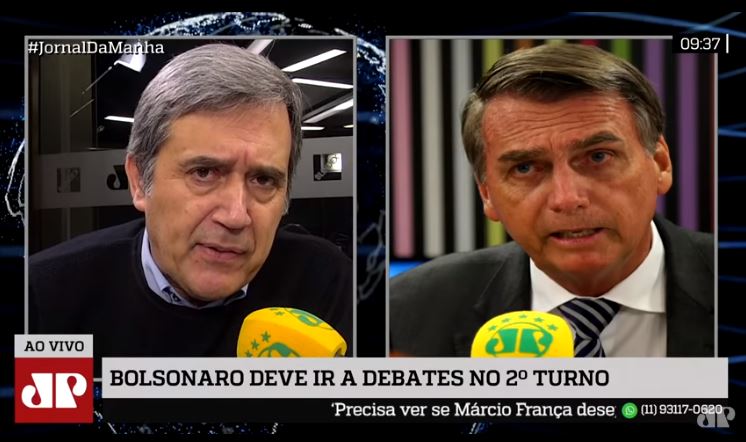 In an interview with São Paulo-based radio station Jovem Pan, right-wing candidate Jair Bolsonaro has outlined his plans to uphold his combative rhetoric in a final bid to become president of Brazil on October 28.

The mobilising discourse that has so far characterised his presidential campaign is one of the main reasons Bolsonaro’s support network is so vast and last weekend it saw him through to the second round of electoral voting.

When asked whether he planned to alter his conservative discourse to attract more centrist voters ahead of the second round vote at the end of the month, the candidate replied, “I can’t just suddenly become ‘Little Peace and Love Jair’ … I’ve got to carry on being the same person.”

Just this morning, the presidential candidate maintained his steadfast approach towards tackling Brazil’s current security problem, tweeting, “we are going to crack down hard on violence to create a safer, freer Brazil for everyone…we want to give the population back their right to walk the streets fearlessly, to live fearlessly. Crime is our enemy, not citizens!”

Speaking to the radio station Bolsonaro did, however, attempt to make up for his previous comments about the country’s minority groups that have upset swathes of Brazilians. “I used to use swear-words now and again,” he admitted, claiming “I don’t make those types of jokes anymore.”

In fact, the candidate made conscious efforts to include all sectors of the population, “regardless of race, sexuality and religion,” whilst addressing his voters via social media this morning.

A vast majority of his campaigning has in fact been carried out via social media and he frequently posts about the amount of Facebook followers he has. As a result, Bolsonaro has spent considerably less on his campaign than rival candidate Fernando Haddad. According to data reported by the New York Times, he had spent around $235,000 by mid-September of this year, in comparison to Haddad’s $6.3 million, said the newspaper.

Even when results of the first round of voting were released, the candidate opted for a Facebook Live transmission to address the public, rather than the traditional press conference.

Notably, however, social media is also the place where his opposition have chosen to mobilise, with #EleNão protests being organised almost entirely via Facebook and frequently recorded as a trending topic on Twitter.

Opinion: Bolsonaro is shocking, but not surprising