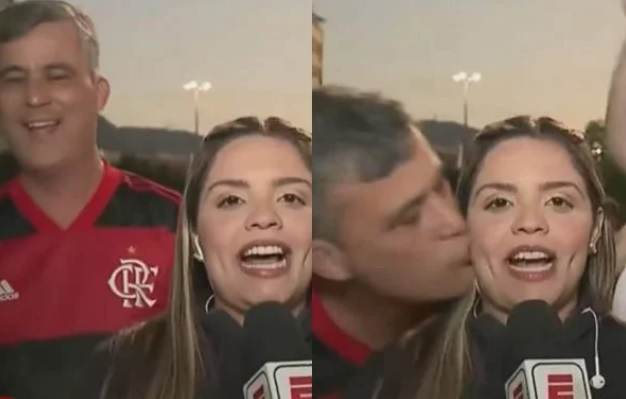 Reporter Jessica Dias was harassed by a fan at Maracanã. Image courtesy of ESPN

Football is by far the most popular sport for Brazilians, but for women, going to stadiums to watch a match can be fraught with harrasment, unwanted sexual advances and worse.

The plight of women at football matches was again brought to the forefront this month when, on September 7, an ESPN reporter was harassed by a fan during a live report before a game at Maracanã, the country’s largest stadium located in Rio de Janeiro.

During the report, a fan stood behind journalist Jessica Dias, rubbed her and kissed her cheek. The episode sparked national outrage. The fan was arrested and spent the night in jail before being released. The journalist criticized the episode and demanded punishment of her aggressor.

Teams, players, fans, journalists and NGOs came to the reporter’s defense and criticized the increase in cases of sexism and harassment against women at Brazilian stadiums in recent years.

A March poll of visitors to the Mineirão stadium in Belo Horizonte, one of the largest in the country, showed that at least 55% of women have suffered or witnessed acts of sexual harassment at matches.

According to the forum, the increase in violence against women is related to the values ​​of patriarchy that are still very present in the country, “and the game of football can act as a kind of catalyst, envigorating the values ​​of masculinity and the way in which certain men see themselves within a gendered power structure.”

Not an isolated case

The harassment of journalist Jessica Dias isn’t an isolated case in Brazil. Last November, there were two reported cases at the Mineirão stadium.

In the first, a man stroked the body of a female student. In the second, a female fan was forcibly kissed on the mouth.

These two episodes led to the creation of the “everyone against sexual harassment” campaign with the aim of raising public awareness.

This September, another fan was the victim of harassment at the Maracanã. She said a man pulled her hard by the arm and tried to grab her. When reporting the case to the police, the woman said she received the following response: “Next time, leave the woman at home.”

According to Elisabeth Murilho da Silva, PhD in social sciences, there is a general understanding that football stadiums are male environments. “Women, for a long time, had to wear ‘disguises’ – football shirts that didn’t highlight their gender attributes,” she said.

Despite having one of the most successful female national teams in South America, women football players at all levels are often the target of harassment in Brazil.

Such was the experience of Giovanna, a 13-year-old girl who plays for a boys youth club in Rio de Janeiro because there is no girls team for her age group, according to Jornal Nacional.

Despite being one of the leading scorers on her team, Giovanna told the reporter at Jornal Nacional that she still hears prejudiced comments coming from the stands.

“They say that women have to be in the kitchen, that football is just for men and much worse. They get very angry with a girl playing better than their sons. I think they are very jealous,” she said.

Female referees also face aggression and harassment on the field. In May of this year, referee Deborah Cecília sent off a player in a state championship game. After receiving the red card, the player tried to attack her and he had to be held back by teammates and the assistant referee.

Amendments to the Fan Defense Statute

The increase in gender violence in stadiums led federal deputy Sâmia Bonfim to present a bill on September 9 to amend the Fan Defense Statute, a set of rules to protect people who watch football matches in Brazil.

The deputy’s proposal aims to guarantee more protection to victims in cases of harassment and sexism at stadiums.

Justifying the bill, Ms. Bonfim said that, even though they are the majority in Brazil, the right of women to attend sporting events safely is going unfulfilled.

“Unfortunately, sporting events, especially football stadiums, have been an example of this,” she said. “Many women supporters do not have a specialized channel for receiving and sending complaints. Helpless, when they go through similar episodes, they stop going to the stadiums out of fear and insecurity.”

Opinion: A look at where Brazil’s elections stand ahead of Sunday’s vote