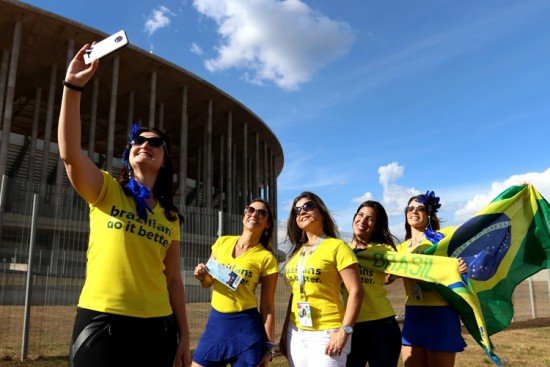 People from all over the world have travelled to Russia to support their teams in the World Cup this year, both alone and in groups, and for 45 Brazilian women, it was no different.

Strangers to each other before the tournament, these women have used social media to create their own groups, sharing information and advice on attending the upcoming tournament, called Elas Na Copa (women at the world cup).

Camila Gomes told MdeMulher that after buying her ticket for the World Cup, she wanted to talk to other people who were attending the event to share advice on travel and accommodation, as well as to meet other football fans along the way. She found a multitude of Whatsapp groups and discovered a large gender discrepancy.

So, she created a women’s-only group.

The Whatsapp group brought Brazilian women together from a wide variety of backgrounds, jobs, ages and hometowns, each one with a different story, but all unified by their love of football.

Armed with yellow t-shirts that read ‘Brazilians do it better,’ the groups share information about the fixtures, as well as providing an outlet to talk football for hours on end.

“Our group only talks about [football], our other friends must be tired of it,” joked Mariana Neme, one of the group’s organisers, reported in Correo Braziliense. Neme added that although the group was initially devised to share information, it has managed to fight back against two stereotypes for women.

“The objective was to be informative, but we ended up showing that women understand football too,” she said. “Being part of this movement shows that the place of the woman is wherever she wants to go.”

Brazilian news site TNH1 also spoke to the women involved in @elas.na.copa, highlighting the importance of women having a safe space when they are travelling alone in a country they don’t know.

“The group brought some peace for the female fans,” Bianca Geocze told the news channel. “We are heading for a universe where there are still a lot of prejudices about women, which is football. There is also the cultural question of Russia and the machismo that exists there. It helps us to know that we won’t be alone.”

In many countries across the world, football is a stereotypically male domain, although in South America, female fans are often just as die-hard as their male counterparts. Elas Na Copa is giving them the opportunity to team up and support their country together in a prejudice-free and safe environment.