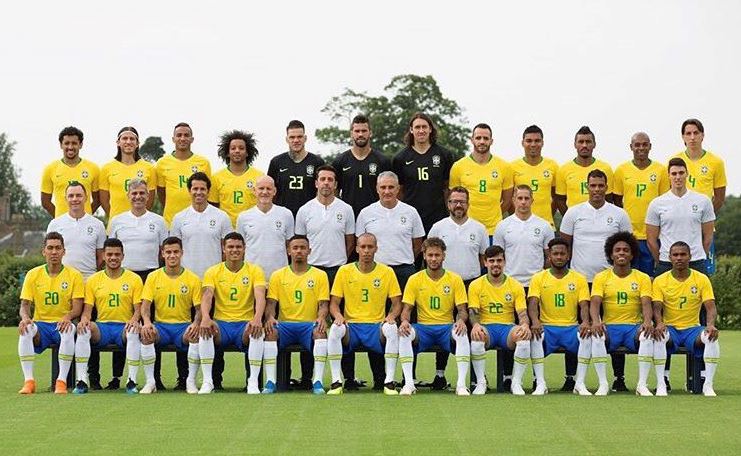 Still reeling from their 7-1 defeat to Germany in the 2014 World Cup semi final, which prompted a national inquest after the manner in which the team were humbled on home territory, Brazil are ready and raring to fight back for this year’s title in Russia.

Bookies have been taking bets on the team as one of the favourites to win the tournament, along with Germany, France and Spain.

Brazil Reports takes a look at manager Tite’s squad for the 2018 World Cup.

Notable changes: David Luiz will not make an appearance this year, a stand-out change to the squad after he captained the team in the last World Cup and came up big with a beautiful free kick against Colombia in La Seleção’s 2-1 quarterfinal win. Unfortunately, this time, injuries and an abnormally poor season at Chelsea were decisive in Luiz being left off the list.

Also out will be Dani Alves, the normal starter at right-back who suffered a knee injury recently. He will be replaced by former Real Madrid man and current Manchester City defender Danilo.

Star player: Who else but Neymar? The Brazilian forward is widely considered one of the world’s top three players after Lionel Messi and Cristiano Ronaldo. He had scored 53 goals in 83 games for Brazil before an injury in Champions League put an early end to his season. Fans were worried the injury could keep him out for the World Cup, but fortunately he seems to have made a full recovery and scored a beauty in his first action back against Croatia. He responded in the next friendly against Austria by scoring again in Brazil’s 3-0 win and its final tuneup before things get started in Russia.

One to watch: This could be the tournament that Phillippe Coutinho, someone who knows all too well how it is to play in Neymar’s shadow, really steps up and makes his mark for Brazil. After being traded from Liverpool to Barcelona midseason, Coutinho started getting into a rhythm late in the season with his Blaugrana teammates. He scored four goals for Brazil in its dominant qualifying campaign that saw it finish first in CONMEBOL by a large margin over the fellow South American countries that had to sweat it out until the last qualifying match in October.

Impact from the bench:  Rumour has it that Fred, the midfielder who has just signed for Manchester United, could be worth keeping an eye on. However, it is unlikely he will make the starting line up. The young but talented midfielder hasn’t scored yet for Brazil’s national team but his potential is undeniable. He helped former Ukranian club Shakhtar Donetsk to win three league titles and was impressive enough to land what is reportedly a £47m deal.

Brazil are in group E of this year’s World Cup, meaning they will face Switzerland, Costa Rica and Serbia in the group stages. Let’s take a look at Brazil’s group stage rivals and what to look out for:

The Swiss famously beat Spain 1-0 in their first group stage game of 2010 in South Africa in a tournament that the Spanish would then go on to win. Could the same thing happen eight years later where Switzerland dethrones Brazil in a shocker? Probably not, but still this is a side that should not be taken lightly and always makes for a tough out at international tournaments.

Watch out for: Xherdan Shaqiri. The Stoke City midfielder is Switzerland’s most established player and secured a hat-trick in the last World Cup and has 20 goals total for the Swiss.

The darlings of the last World Cup in Brazil, Los Ticos may come crashing back down to earth in Russia. Though they made it all the way to the quarterfinals in 2014, it’s tough to see this team being able to keep it close with Brazil or finish ahead of either Switzerland or Serbia. Even with a five-man backline and a world-class goalie in Keylor Navas, the defense can be prone to strange lapses and Brazil’s high-powered attack will look to feast.

Watch out for: Celso Borges. An experienced midfielder who makes a great tandem with Tico captain Bryan Ruíz. If Borges is able to open passing lanes and be aggressive on defense to provide a one-man balancing act, then Los Ticos could hang with Brazil longer than expected.

A sexy pick to get out of the group despite being technically the fourth pod, Serbia is another team with a strong and veteran midfield. There is led by a veteran trio of Luka Milivojevic, Dušan Tadić and Nemanja Matic. On paper, this team has the talent to at least give Brazil something to think about for 90 minutes and should probably be considered the biggest threat to at least draw with the Brazilians.

Watch out for: Aleksandar Mitrović. The 23-year-old striker has scored five times in the last three friendlies before the World Cup. He’ll need to convert the chances his midfield supplies him with to get Serbia out of the group and on to the Round of 16.

Walmart Sells 80% of its Brazilian Stakes to Advent International