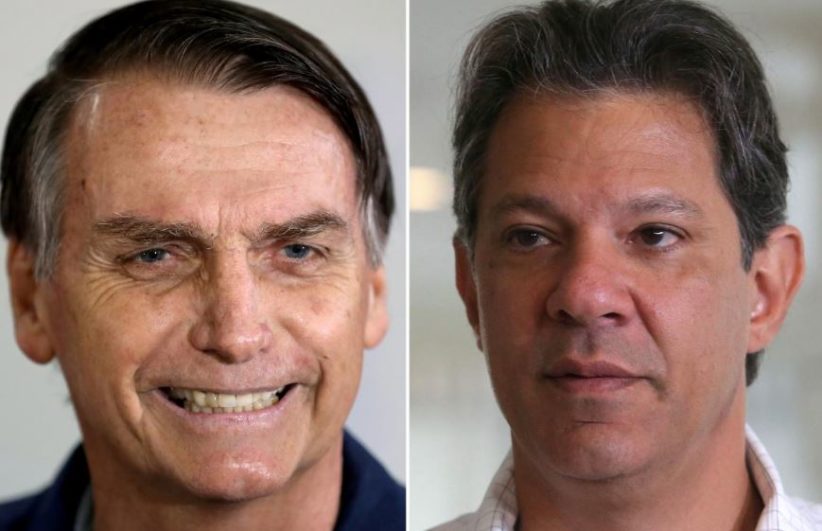 With virtually no time remaining until the final electoral vote, surveys predict that ideologically contrasting candidates Jair Bolsonaro and Fernando Haddad have never been closer in terms of their predicted popularity.

Released yesterday, the results of a survey conducted by research institute Datafolha predicted that right-wing candidate Bolsonaro has a 56% chance of victory this Sunday, with left-winger Haddad close behind on 44%. The institute is part of the Grupo Folha conglomerate, which also owns the national newspaper Folha de S. Paulo and has a two point margin of error.

Of all Brazil’s regions, the north of the country has showed the largest increase in support for Haddad, where his probability of gaining valid votes has grown by 7%. The only region in which Haddad leads in voter popularity is the northeast of Brazil, the very area that ex-President and imprisoned PT candidate Lula da Silva also hails from, and where 66% of voters claim they intend to vote for the left-wing candidate.

Bolsonaro’s popularity, on the other hand, has recently dropped in the north and south of the country, increasing only in the centre-west of Brazil.

Over his last week of campaigning, Haddad has been devoting all of his efforts to turning the predicted results of Sunday’s vote around. In a desperate catch-up attempt to warn Brazil’s population of what he believes Bolsonaro represents for the country, the candidate has attended campaign rallies in the cities of São Paulo, Rio de Janeiro, Recife and João Pessoa as well as taking part in media interviews with outlets across the country.

Yesterday, October 25 Haddad tweeted, “these next three days are fundamental. The population is out on the streets making it clear who Bolsonaro is, what he has done, said and what he thinks. He only talks nonsense, he’s a person that respects nobody.”

His rival candidate, on the other hand, has preferred to stick to campaigning online in the build-up to the second electoral vote, using live social media broadcasts to relay messages to his voters alongside his regular media interviews.

Bolsonaro might well have good reason for choosing to stay off the streets and campaign over the internet, considering he recently fell victim to a failed assassination attempt at a political rally in Minas Gerais, where he was stabbed in the abdomen.

Aside from health reasons, however, Bolsonaro knows all too well how to communicate with his voter demographic and supporters, for whom social media plays an important role in their following of current affairs and politics, so much so that news outlets such as the BBC have labelled him the “social media candidate.”

Digital media communications is an area that Bolsonaro undoubtedly understands well, given the right-winger’s 1.9 million followers on Twitter and 8.1 million on Facebook. This is a game to which his opponent Haddad arrived much later, considering his mere 1.6 million Facebook and 932,000 Twitter followers in comparison.

According to the BBC, analysts have also reported a notable move towards welcoming social media among right-wing members of the Brazilian middle and upper classes who support Bolsonaro.

Just this morning, the candidate took to Twitter to address his following in a short video detailing the final challenge of his presidential campaign, which he claims is “to defeat the lies of the PT,” in which he spent two minutes picking apart his rival Haddad. However, in view of recent statistics, the right-wing also reminded his voters that “nothing is won yet!”

Having come from far behind, therefore, is Haddad finally gaining the momentum he might have received if he had been registered as a candidate from the start? Or, will the anti-PT sentiment, which Haddad himself claims has “always existed” in Brazil result in his eventual downfall?

Statistics show that Bolsonaro still remains the favourite candidate, but a comeback from Haddad does not seem as impossible as before.

Regardless of whoever becomes Brazil’s next president this Sunday, activists and media outlets have urged the country to accept the result democratically as, if there is one thing the country has learnt from this electoral period, it is that political violence does not show any signs of diminishing.