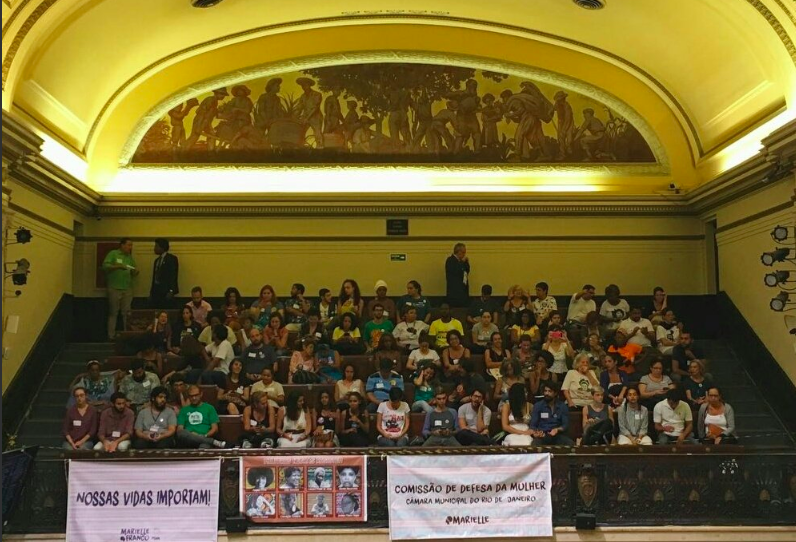 Rio de Janeiro’s city council assembles to vote on the legal projects Marielle Franco was unable to finish, passing five out of six on the first vote.

The special session, which took place yesterday at Rio de Janeiro’s Tribuna da Câmara Municipal, saw its public galleries full of Franco’s supporters who had all been rallied via an intense social media campaign, led using the hashtag #NãoSereiInterrumpida (#IWillNotBeInterrupted).

Ahead of the vote, the campaign saw 13,000 of Marielle’s voters and supporters send emails to each one of Rio de Janeiro’s city councillors, pressuring them to approve the bills in Franco’s name.

Franco’s legal projects focused on a number of issues, focusing mainly on rights for women, especially those of Afro descent, mothers, young people and the LGBT community. Beside one which was left out for technical alternations, the only bill the councillors voted to delay was the call for a commemorative day to assert the rights of the city’s LGBT population.

During the vote, female activists made a point of emphasising the absence of 13 city councillors from yesterday’s vote, calling out each of their names individually. Moving chants of “For Marielle, I say no to intervention” and shouts of “Marielle Present” then resounded from the government building.

Despite the opposition of one councillor, Otoni de Paula, it was also decided that the City Council tribune will be re-named the Tribuna Marielle Franco, in honour of her memory. Fellow city councillor David Miranda tweeted: “a place where Mari waged many a battle, that we will continue to wage for her. Mari, this tribute is still small in comparison to your greatness!”

Franco’s legal projects, both approved and postponed, are as follows:

APPROVED: 1 – Espaço Coruja/ ‘Night Owl Space’: a crèche-type space for parents who work or study at night where they can leave their children. Intended to combat gender inequality, allowing mothers who work double shifts to continue their studies or stay in their jobs.

APPROVED: 3 – Dossiê Mulher Carioca/ The Carioca Woman’s Dossier: to aid formation of public policy focusing on women. It will specifically target areas such as healthcare, social assistance and human rights.

POSTPONED: 6 – Dia de Luta contra a Homofobia, Lesbofobia, Bifobia e Transfobia / Combative Day against Homophobia, Lesbophobia, Biphobia and Transphobia: a combative day for Rio de Janeiro to assert itself against homophobia in all its forms. This would be celebrated on the May 17th, the day when the International Code of Diseases no longer classified homosexuality as an illness.

“I try to capture the essence of the people”: Brazilian photojournalist Ana Carolina Fernandes talks to Brazil Reports