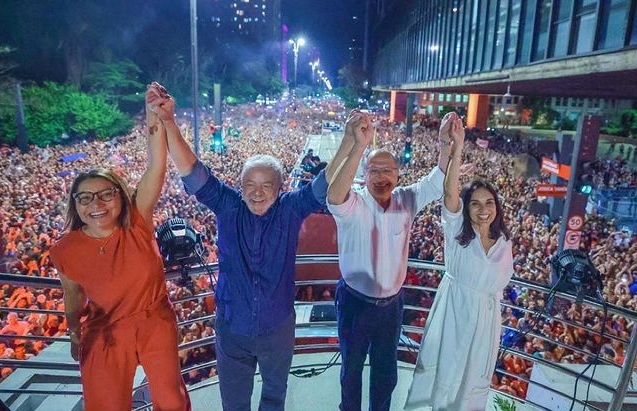 São Paulo, Brazil — Twelve years after leaving the presidency of the Republic of Brazil, Luiz Inácio Lula da Silva will return to run the country.

This Sunday, the Workers Party candidate defeated current president Jair Bolsonaro on the elections runoff by 50.90% to 49.10% of the votes.

60,345,999 voters decided it was time for Lula da Silva to reassume the country’s leadership. Bolsonaro leaves office with 58,206,354 votes received.

After the victory was confirmed, Lula spoke at the hotel from where he followed the vote count, in downtown São Paulo.

The president-elect reaffirmed the commitments he made during the campaign, such as toughening the fight against illegal deforestation, especially in the Amazon, fighting to end hunger and poverty in Brazil, preaching the search for peace and talking about rebuilding the country.

“Our most urgent commitment is to end hunger again. We cannot accept as normal that millions of men, women and children in this country do not have enough to eat, or that they consume less calories and protein than necessary”, said the president-elect.

Over the environmental preservation, Lula has set an ambitious goal for his third term as president of Brazil.

After the speech, Lula da Silva headed to Avenida Paulista to meet a crowd of thousands of supporters celebrating his victory.

“Of all the victories I’ve had, this is the most consecrating victory, because we defeated authoritarianism and fascism. Democracy is back in Brazil. Freedom is back in Brazil. The people will be able to smile again,” he told the crowd.

He also said that the victory was won by the people who wanted more culture, education, equality and fraternity.

“Victory for all men and women who decided to free the country from authoritarianism”.

The victory also represents a turnaround in the political trajectory of the greatest leader of the Brazilian left.

In April 2018, Lula da Silva was arrested to begin serving his 12-year sentence for passive corruption and money laundering.

He spent a year and a half in the Federal Police jail in Curitiba, until Brazil’s Supreme Court ruled that a convicted person could only be arrested after all his possibilities to appeal the sentence were exhausted.

In April of last year, the Supreme Court annulled all the cases against Lula, claiming that the actions could not have been judged by the then judge Sérgio Moro since the cases should have been sent to the Federal Court of the Federal District and not of Paraná. The decision re-established Lula’s political rights.

At 77 years of age, Lula also said that he intends to take two days to rest after the long journey of the electoral campaign, which began in August.

The new term of Luiz Inácio Lula da Silva in the presidency of Brazil, takes place on January 1, 2023.

Bolsonaro becomes the first Brazilian president not to win re-election