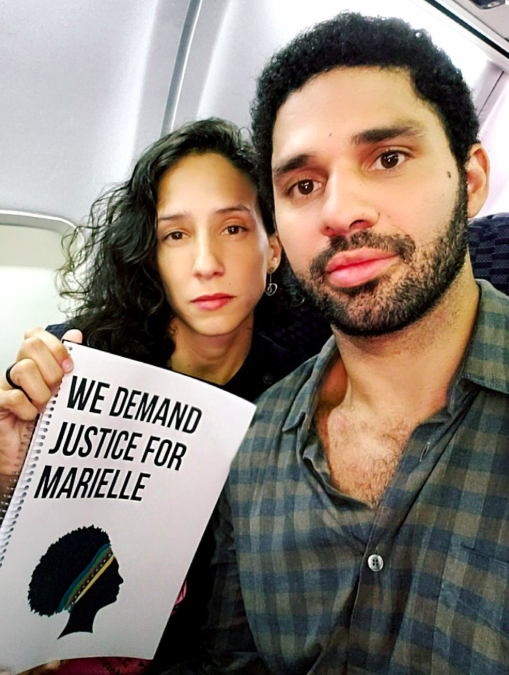 Armed with the petition ‘We Demand Justice for Marielle’ which had accrued over 20,000 signatures, they demanded that an international commission accompany investigations carried out by the Brazilian government into Franco’s murder. Among the signatures are some recognisable names: Nigerian author Chimamanda Ngozi Adichie, model and activist Naomi Campbell, former CIA employee Edward Snowden, singer Janelle Monae, Brazilian actor Wagner Moura and linguistics professor Noam Chomsky, along with many others.

The petition detailed their indignation and outrage at the fact that Brazil’s government are still yet to provide answers to the enigmas surrounding Franco’s death:

“We are deeply concerned and shocked by this commando-style killing of a woman who was a voice for the voiceless and a symbol of resistance to state-perpetrated violence, militarisation and anti-democratic forces. Given that Marielle’s assassination bears all the hallmarks of a targeted assassination, we call for the creation of an independent commission comprised of prominent and respected national and international human rights and legal experts and tasked with carrying out an independent investigation of the murder of Marielle Franco with the full cooperation of state judicial and police authorities.”

The famous faces that signed the petition are not the first celebrities to speak out. Just over a week after her assassination, during a concert in Rio de Janeiro, Katy Perry dedicated the song “Unconditionally” to Marielle, displaying a photo of her on the stage screen. The singer then proceeded to invite Marielle’s sister and daughter onto the stage at the end of the performance and asked for a minute of silence from the audience.

American actor and civil rights activist Shaun King also took to twitter to publish an ode he wrote to the former Rio city councillor, who stood for the rights of black Brazilian women, along with the LGBT and favela communities.

“A fearless, compassionate soul. She fought the crisis of public life brutality in Brazil face to face.
She was assassinated Wednesday.
An unspeakable loss for Brazil and for the whole world.
I’m sad. And pissed.”