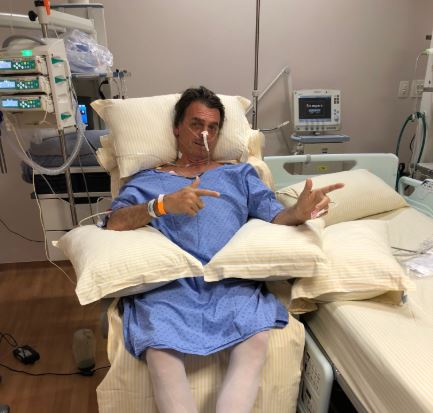 Since the knife attack on presidential candidate Jair Bolsonaro last Thursday, September 6, it seems the politician’s situation has deteriorated as he now requires major surgery.

Initially, it was reported that the candidate had not been too badly injured by the attack and comfort came from his son, Flávio Bolsonaro, who assured his Twitter followers that the wound was only superficial and that his father was doing “ok.”

Shortly afterwards, however, his son reported that it was in fact “worse than originally thought” and had meant a severe loss of blood and drop in blood pressure. In the days that followed the incident, he continued to provide updates and photos via social media, reporting that his father’s condition was improving and that he had begun physiotherapy sessions.

However, it seems that a hospital statement released this morning, September 10, revealed that the candidate will need to undergo another major surgery in order to reconstruct part of his intestine that has been affected by the stab wound, reported newspaper Estadão.

Over the weekend, Bolsonaro was airlifted and transferred by helicopter to São Paulo’s Albert Einstein hospital, where medics have been evaluating his condition.

The candidate continues to be fed through a drip and, at this point, is not showing any signs of infection.

Meanwhile, in Rio de Janeiro, demonstrations in support of Jair Bolsonaro’s life, policies and candidacy have been organised by his son and took place yesterday, September 9, on Copacabana beach.

Dressed in the same shirt his father wore during the campaign rally in Minas Gerais where he was stabbed, Flávio Bolsonaro gathered together a group of the politician’s supporters to stand against political violence and those who had attempted to take the politician’s life at the weekend.

“My father went as far as he could, the rest is up to us,” stated his son at the demonstration, amidst shouts of “legend, legend!”

“Each one of us here today is Bolsonaro,” he said, followed by chants of “our flag will never be red,” alluding to the party colours of rival party, the PT (Workers’ Party).

According to the BBC,  40-year-old Adelio Bispo de Oliveira has been arrested in connection with the attack, claiming to have been acting “on God’s orders,” reported local news outlet Veja SP.