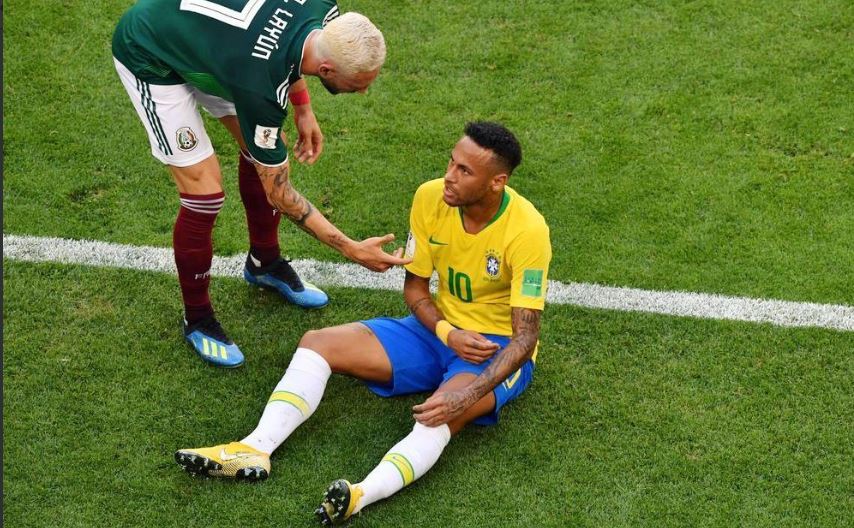 Following an earlier tackle from which Mexico’s Layún offered to help Neymar da Silva Jr. up off the floor, Brazil forward Neymar was later seen rolling around on the floor in pain after another scrap with Layún on the touchline.

After appearing to be convulsing in pain, many believed at first that Neymar was purely overreacting, justifying the referee’s decision not to consult VAR technology.

However, upon further inspection of the incident, video footage seems to show Layún deliberately stamp on the recently-operated Brazil forward’s ankle.

for everyone who believes that neymar acted and no one touched him.
here’s Layún stepping on neymar’s ankle.
thanks for attending my tedtalk.#BRAMEX pic.twitter.com/xmzZ3SBfO6

Despite his apparent agony, the Brazilian forward carried on playing, setting up Brazil’s second goal in the match’s 88th minute, having already scored their first at the beginning of the second half.

When asked about his dramatic reaction to the incident after the match, Neymar responded “Look, I think it’s more of an attempt to undermine me than anything else. I don’t care much for criticism, not even from the press because in a way this can influence athletes.”

What he was unaware of, however, was the social media storm that had been brewing in the Brazilian team’s online absence.

After Layún shared a picture of Mexico’s seleccion on his Instagram profile, Brazilian actress Tata Werneck commented, saying “You trod on the foot of a recently-operated player? With the greatest of respect to your country and your team, a whole country saw how spiteful that was.”

The actress and comedian later took to her twitter account to reiterate her anger at the Mexican player’s actions. “I’m gonna beat the hell out of this blonde Mexican. Arsehole. Fuck you,” followed by an apology to her followers for using explicit language, “sorry, guys.”

She also directly tweeting the player himself, saying she would like to speak to him in particular.

Another Brazilian actress, Cleo Pires, also commented on the Mexican player’s Instagram photo, “I am in favour of good sportsmanship. You had none.”

When it came to his turn to speak at post-match interviews, Mexico manager Juan Carlos Osorio did not make direct comment on the Layún incident, but spoke of his disapproval at the perceived “time-wasting” because of “one single player,” during the game, ending his statement with “there shouldn’t be so much acting.”