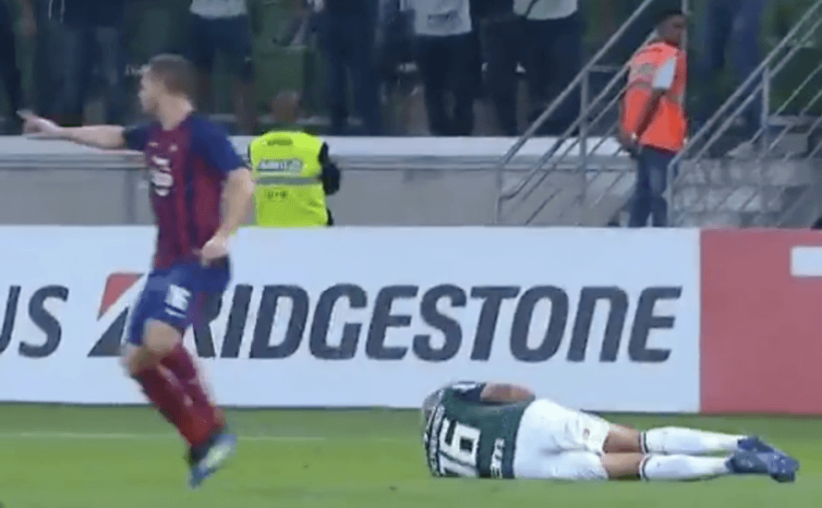 Deyverson’s long battle with the laws of gravity are over after the Brazilian striker put forth an extraordinary display of diving during a match against the Paraguayan team Cerro Porteño. For his troubles the 27-year-old was sent off, after referee Germán Delfino witnessed not one, not two, but three dives in the space of a minute.

The first dive was one that drew the striker into an impressive somersault and earned a Cerro Porteño player a yellow card. In his indignation, his teammate dummy-threw a ball past Deyverson, who went down again in a heap. For good measure, Deyverson dived a third time when pushed from behind by the angry mob of players that had now amassed to protest the referee’s inaction.

By then, Argentine referee Delfino had seen enough and sent Deyverson off in what was a bizarre end to the game.

Palmeira were a goal down and the absurd show that Dayverson put on was after regular time had elapsed and the game was into injury time.

To add to the lack of sportsmanship, the most remarkable aspect of the game was that Palmeiras were already going to advance to the quarterfinals of the Copa Libertadores against Chilean Club Colo-Colo as they were ahead 2-1 on aggregate after two legs.

As anticipated, social media didn’t let this one slide. Hernán Rodriguez tweeted that “the worst actor award does to Deyverson from Palmeiras!” with many on social networks expressing outrage that the player hasn’t faced further censure. One vintage reaction on Youtube replayed the second dive in slow motion to simulate a Cerro Porteño player doing a “haduken” a la Street Fighter of the 90s.

Deyverson’s theatrics now belong to the growing list of Brazil’s Hall of Shame. The dive was reminiscent of the famed diving of Rivaldo during the 2002 World Cup; another shameless display that led to a fine for the legendary Brazilian player. Compatriot Neymar is another that is growing a reputation for fine Hollywood displays that will outdo every Oscar contender this year.

For Deyverson, however, this is not the first time he has been in hot water. When playing in Europe, spat at Diego Godín of Atletico Madrid. Following this incident, it is now Deyverson’s reputation in the public that is taking a dive.

Judges ban Lula from October’s elections, but he isn’t giving up yet