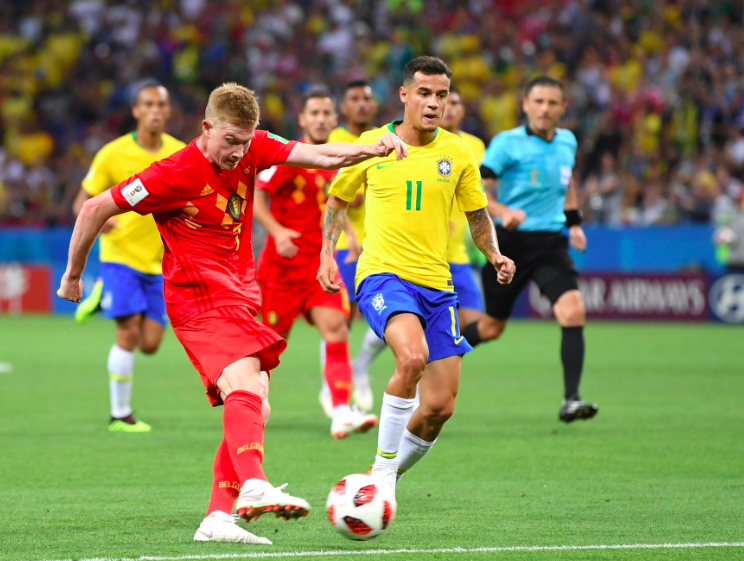 Brazil’s 2014 World Cup heartbreak was destined to be redeemed until a high-flying Belgium side took fate at its own feet and dominated their Seleção 2-1 in Friday’s World Cup quarterfinal from Kazan, Russia.

Manager Roberto Martínez shifted Belgium’s starting lineup from the prior Round of 16 match by plugging in Marouane Fellaini and Nacer Chadli, both of whom scored late off the bench in the Red Devils’ exciting 3-2 comeback against Japan. The look clearly created problems for Brazil in the first half as it failed to slow down Belgium’s plethora of attacking options.

In the first 10 minutes, Brazil was blessed with several good-looking chances, including what looked to be a Tiago Silva tap-in that instead hit the left post. When they couldn’t take advantage of the scoring opportunities in front of them, it was the Belgians who responded by not missing on their own chances.

On Belgium’s first corner kick, Chandli’s dangeously placed volley got into the thick of the crowd and bounced off Brazil’s Fernadhino before going into the net for an own goal. The Red Devils kept the pressure on and Kevin De Bruyne’s wonder strike in the 31st minute from above the box put Brazil back two goals early and on the brink of elimination. In its storied World Cup history, Brazil has never come back to win or tie a game where it has been down two goals at the half.

Brazil’s seleção dearly missed defensive midfielder Casemiro, who was suspended for this quarterfinal tilt due to yellow card accumulation. Third-string right back Fagner also struggled to quell the Belgian attack that consistently found space on his side of the field.

The trio of De Bruyne, Romelu Lukaku, and Eden Hazard sliced through Brazil’s previously stubborn defense that had only allowed one goal in the tournament up to that point.

Roberto Firmino came on in the second half to give the offense some needed life and the difference was immediately clear. A 50th minute cross from star left back Marcelo almost found Firmino’s left foot in front of goal, but it skipped over and continued innocently towards the sideline. In the 55th minute, it was Gabriel Jesus who crashed the box and was tackled hard by veteran defender Vincent Kompany, but a video review ruled there would be no penalty kick awarded to the Brazilians.

After narrowly avoiding a third Belgian goal in the 62nd, Douglas Costa – who subbed on for Gabriel Jesus – came right back and had his shot on goal swapped away by goalie Thibaut Courtois. The ball lingered right in front of goal for a second, though, and Paulinho wasn’t able to poke it into goal.

Costa came back to lead the charge again in the 75th minute and again had his shot blocked by Courtois. In a spell of deja vu, Brazil had another rebound opportunity but Neymar’s quick try was also rejected.

In the next minute, it was substitute Renato Augusto who finally broke open the scoring for Brazil as his header from the service of Philippe Coutinho proved to be good. The all-out effort was then on for Brazil to get the needed tying goal as time wound away.

Augusto had a golden shot at a second goal in the 81st minute but pushed an open opportunity wide to the left. Brazil’s comeback was not to be as Coutinho whiffed on a perfect feed from Neymar a few minutes later and, going into stoppage time, Neymar nearly connected on a pair of chances that would have prolonged Brazil’s chances.

The Belgium win means the Red Devils will face France in the semifinals with a chance to play for the World Cup title. For Brazil, after its historic tear through South American qualifying, another early exit has cast a cloud over the unfulfilled promise of this generation of players.