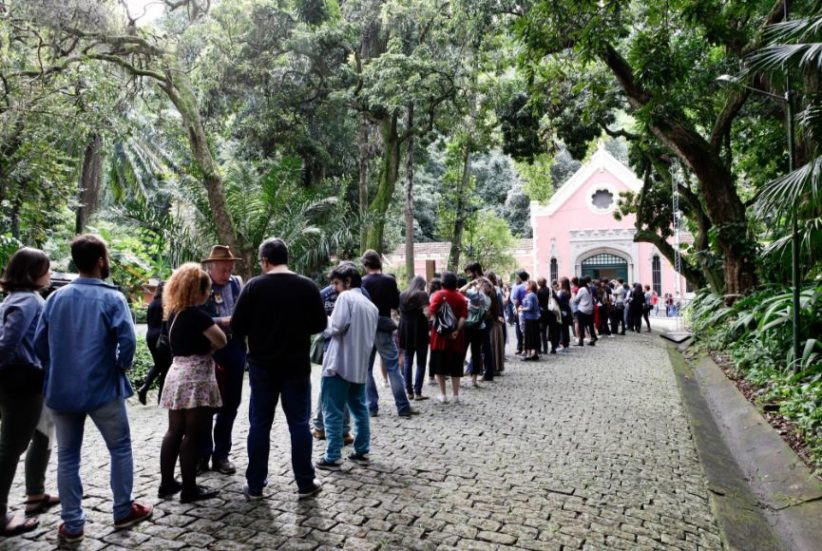 A temporary exhibition dedicated to the diversity of Brazil’s queer community has re-opened this month in Rio de Janeiro’s iconic Parque Lage.

The exhibition, entitled “Queermuseum: cartographies of difference in Brazilian art,” sets out to explore expression of gender identity, diversity and difference through artistic mediums. It displays 264 pieces of artwork by 85 different artists, curated by Gaudêncio Fidélis.

In Brazil, the meaning of the word ‘queer’ has seen a vast transformation over the last 20 years. Around the year 1980, it began to lose its pejorative connotations as members of the LBGTIQ+ community set about making their voices heard.

However, Rio de Janeiro is not the first region of Brazil in which the exhibition has opened its doors to the public. In fact, its first opening last year in southern Porto Alegre sparked social media backlash from groups such as right-wing political movement Movimento Brasil Livre, who claimed that the exhibition paid homage to pedophilia, pornography and zoophilia, as well as being blasphemous.

As a result, offended visitors threatened to boycott the Santander Cultural Space where the exhibition was on display until it was forced to be taken down.

Notably, members of Movimento Brasil Livre were those who campaigned for leftist former President Dilma Rousseff’s impeachment in 2016 and had their Facebook page temporarily deleted this July as part of a fake news purge carried out by the social network.

Although all accusations against the exhibition were dismissed by the Public Prosecutor’s Office, who concluded that no crimes were being committed in its display, the protests sparked debate for months over the definition of art and LGBTIQ+ rights.

Nonetheless, despite opposition, the Rio de Janeiro re-opening of the queer museum was a significant achievement for curator Fidélis, who addressed crowds on the day of its reinauguration. “In the face of censorship and the shutdown of ‘Queer Museum,’ there was no alternative but to react and believe the future had this victory in store for us,” he said, with defiance, reported The New York Times.

His audience was a mixture of opposition and support. Among colourful flags, religious groups were also present, who held banners accusing the exhibition of blasphemy once more.

Brazil’s LGBTIQ+ community is vast and, on the surface, the Portuguese-speaking country’s acceptance and openness of sexual and gender freedom is refreshing. Indeed, the city of São Paulo is home to the world’s biggest Gay Pride celebration.

However, Brazil is also home to the world’s largest Catholic population, whose strict beliefs and practices strongly reject homosexuality. For this reason, LBGTIQ+ groups continue to be subject to persecution by those whose religious beliefs disagree with their decisions and way of life.

This year, in fact, violent deaths in the LBGTIQ+ community reached unprecedented heights, with at least 445 LBGTI Brazilians dying a violent death as a result of LGBTIphobia. The murder of lesbian Rio city councillor Marielle Franco earlier this year was a stark reminder of this.

Indeed, Rio’s evangelical mayor also expressed his discontent at allowing the ‘Queer Museum’ exhibition to re-open in the city. However, Parque Lage-based art school intervened, allowing the decision to go ahead.

According to the exhibition’s curator, it has been put together in the face of international oppression of queer communities. The exhibition’s mission is to “provide a field of investigation into the patriarchal and hetero normative character of the museum as an institution, by ensuring that it constitutes an experience, allowing you to exercise other thoughts, in other words, thinking outside of the rules.” “It’s an exhibition founded on democracy and the vision for an inclusive process,” he added.

Since opening, the temporary exhibition drew in approximately 7,000 visitors on its first weekend and will be open until September 16.

Temer deploys military troops in Roraima, before declaring intentions to limit entry of migrants into Brazil