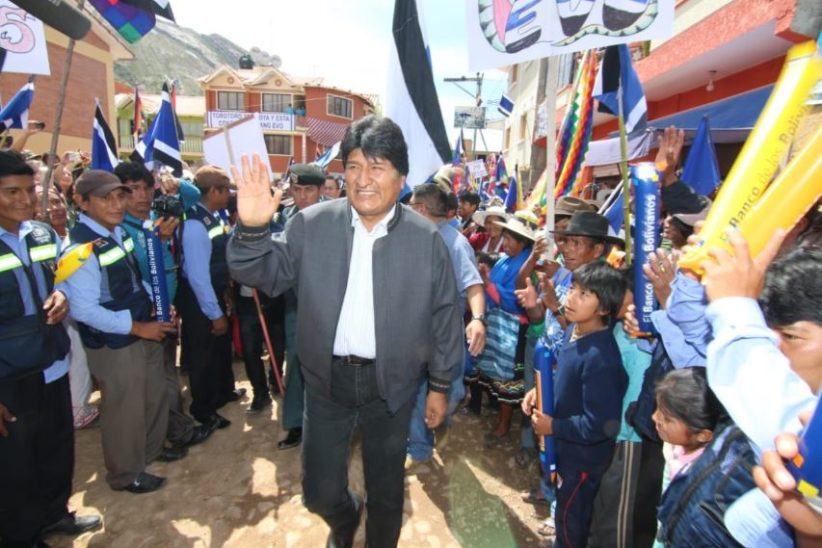 Bolivian President Evo Morales was one of the few international leaders to attend Jair Bolsonaro’s inauguration this time last week.

Alongside him were an unusual mix of leaders, as well as political ideologies, from around the world: Israeli and Hungarian Prime Ministers Benjamin Netanyahu and Viktor Orbán respectively, along with US Secretary of State Mike Pompeo.

On the day of the ceremony, the Bolivian leader thanked Bolsonaro for his invitation to the ceremony via Twitter, wishing him a “successful administration for the good of the brotherly people of Brazil.”

“Bolivia and Brazil are neighbours for life,” he wrote. “While we respect differences, we have a duty to work together for the benefit of our countries.”

However, a more recent look at his Twitter account brings attention to the fact Morales has recently lashed out against one of Bolsonaro’s main allies, calling him a “white supremacist.”

The comment was made in relation to remarks about an urban indigenous community in the city of Rio de Janeiro made by congressman Rodrigo Amorim, who belongs to the same political party as president Bolsonaro, the Social Liberal Party.

Amorim is also coincidentally one of the two politicians who destroyed a plaque commemorating the life and work of congresswoman Marielle Franco, who was assassinated in March last year for reasons believed to have been linked to her career.

Along with his colleague, fellow politician and former military policeman Daniel Silveira, the pair broke road signs that had been dedicated to Franco and put in place by her widower, Monica Benicio, near the City Council where she used to work.

This time, however, Amorim passed comment about the Maracanã Village, a community that inhabits the Old Indian Museum in the Maracanã neighborhood of Rio de Janeiro, claiming it should be used to promote indigenous culture.

Referring to the 14,300 square metre territory, Amorim called it “urban rubbish,” and claimed that a “clean-up” of the area would be necessary to restore order. “If you like Indians, you should go to Bolivia – as well as being communist, it’s governed by an Indian,” he told O Globo. Instead, Amorim believes that the area should be turned into a shopping mall, a carpark or a leisure space, calling its current state “a danger to citizens.”

For his part, Brazil’s new president Bolsonaro has also already made governmental changes that will have potentially harmful implications for the future of indigenous communities. However, in response to widespread criticism of his decision, the new president frequently uses Morales as an example of how indigenous people should not be discriminated against.

Nevertheless, offended by Amorim’s comments, Morales hit back. “We regret the resurgence of white supremacist ideologies… like the xenophobic republic of the US government. Indigenous communities stand up to intolerance and discrimination and promote respect and integration. We have the same rights because we are children of the same fatherland.”

Morales was also careful to use the gender-neutral spelling of the Spanish “[email protected],” which translates to “children” in his Tweet.

Political analysts have commented on the gradual deterioration of Latin America’s “pink tide,” as a wave of right-wing governmental leaders has gradually made its way to power across the continent over the past few years. Morales is one of the few leftist Presidents left.