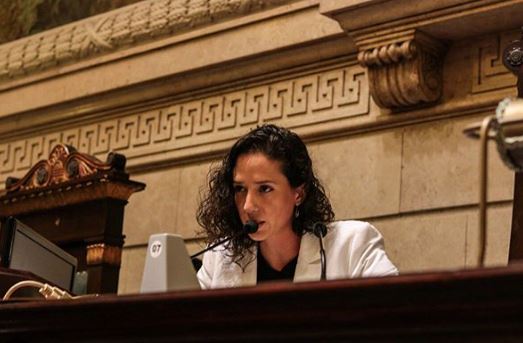 As part of her career as a city councillor, Marielle Franco was president of Rio City Council’s Comissão da Mulher, a group that denounced women’s rights violations and brought them together for support.

In her memory, Franco’s supporters are determined to ensure that it does not remain the bureaucratic institution it was whilst she was alive, but instead becomes an active tool for transformation and a dynamic network for women.

Yesterday, on the day that marked three months since Franco’s death, her team of supporters, which includes politicians, mothers, family members, loved ones and voters, gathered together in Rio’s City Council Hall at 6pm for the launch of this year’s Women’s Commission report.

It was an evening of poetry, music and dedications to Marielle, focused on keeping her memory alive.

“If black women and men are already excluded from different spaces, it is urgent that black women have a voice in the City Council, one that can speak for those who are already used to white men speaking on their behalf. It was in defence of this struggle, but especially on behalf of a project for the city and society, that Marielle carried out her militancy during her term in office.

Her dedication to the struggle was always unquestionable, her commitment to the cause was collective, but there was also a personal dimension in all this. Everything she did was done with love and affection.

As she used to say: we will not be interrupted. We will not accept just any response. We are, and will continue to be, on the streets, in the squares and here too. We will not budge on occupying this space. This house is the peoples’, and it should return to its rightful owners.

Representation is fundamental to dispute a new social model, one that is more inclusive and democratic. The revolution will be feminist and will take place through black women.

A fairer world for women is a fairer world for everyone. Marielle’s legacy is a societal project, in which all types of love are possible, all lives matter, differences are not transformed into inequalities, dialogue prevails and our families exist. Therefore, presenting this report today is part of our legacy. Your jobs, dreams and struggles will live on!”

As it happened … Switzerland hold their own against Brazil’s Seleção