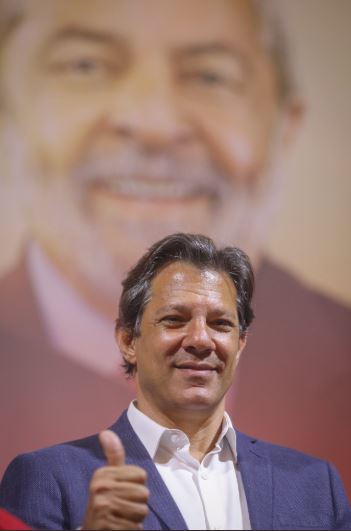 Although his candidacy has only recently been officially announced, Workers’ Party (PT) candidate Fernando Haddad is quickly catching up with poll leader Jair Bolsonaro ahead of next month’s general elections.

PSL candidate Jair Bolsonaro, who remains in hospital after a knife attack that took place in the middle of a Minas Gerais campaign rally, seems to have plateaued in popularity according to recent surveys, in which he has consistently remained around the 28% mark.

On this point, columnist Bruno Boghossian from local newspaper Folha de São Paulo suggests that Bolsonaro’s popularity may have peaked too soon because although his rating remains the same, the number of voters declaring their plans to vote against him has risen to 46%.

Boghossian also suggests that the stagnation of Bolsonaro’s popularity is likely to be a result of attacks against Bolsonaro in electoral propaganda from centrist PSDB candidate Geraldo Alckmin.

In a recent interview with Bloomberg, current president Michel Temer shared his thoughts on the electoral race.

“We seem to be moving towards two very different political sectors, I believe,” he stated. “One that I have described as being more conservative in nature and the other side represents what you might describe as the more populist area of society.”

“These two major contrasts will prove useful for Brazilian voters…it will be easier for them to make a choice,” he added.

When asked about the Workers’ Party, Temer stated that he believed they still had prestige and were likely to make it through to the second round of this October’s elections.