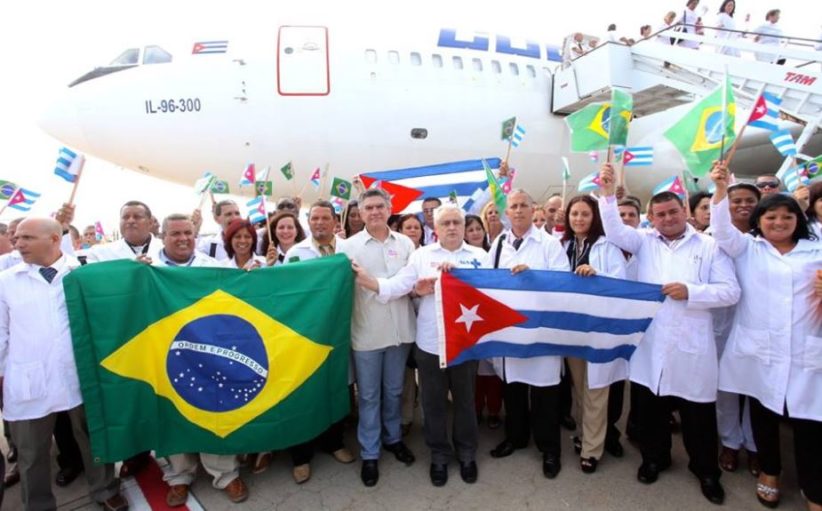 Just over two weeks have passed since Cuba announced its withdrawal from the Mais Médicos programme, after Brazil’s president-elect Jair Bolsonaro laid out the changes he planned to make to the agreement.

According to reports from El Pais Brasil, Cuba’s exit from Mais Médicos was estimated to leave approximately 24 million Brazilians without healthcare. However, Brazil’s Ministry of Health has since released a report confirming that approximately 97% of the vacancies left by the programme have now been filled.

The job vacancies available have provided an opportunity for recently-trained Brazilian medical professionals to be sent to work in other parts of the country. According to a report recently carried out by Jornal da Record, a news outlet favoured by Bolsonaro, over 30,000 Brazilian doctors have applied to take part in the programme.

In conversation with Record, Brazilian Medical Association director José Luiz Bonamigo Filho said, “I think the presence of Brazilian doctors is different to that of Cuban doctors who did not have much freedom…it should be reflected in a better attendance quality for the population.”

Following health experts’ concerns over the communities predicted to be left without medical attention after the Cuban doctors’ departure – often located in some of the most remote parts of Brazil – the Brazilian government published an emergency tender calling for doctors to fill the soon-to-be-available posts.

So far, 8,320 doctors have now been registered to fill the vacancies. The new doctors have until December 14 to present their documentation at the medical centres they have been assigned to.

However, it has not yet been stipulated how the new quota of medical professionals will be spread across the country. In order to fill the gap left by the Cuban doctors, it will be necessary to replicate the distribution of 8,517 doctors across 2,824 Brazilian municipalities – including 34 special indigenous sanitary districts – across the country.

Overall, reactions to Cuba’s withdrawal from Mais Médicos have been mixed. Most negative responses criticised the potential danger for communities to be left without healthcare. Speaking to The Guardian, health secretary for the underdeveloped northeastern Brazilian state of Maranhão, Carlos Lula, warned “the impact will be terrible… I have a big demand and a small supply of doctors.”

However, following the announcement, several Cuban medics have since come forward to share their stories with the press, some of which show evidence of agreement with Bolsonaro’s reasoning for imposing new regulations on the programme.

In conversation with NPR podcast Radio Ambulante, former Cuban Mais Médicos doctor Alioski Ramirez – who was posted to Brasilia in March 2014 – described how, although he was treated better in Brazil than he had been in his former placement in Venezuela, the system still had its flaws.

At first, arriving in Brazil seemed like a dream for him, as well as for many other Cuban doctors, he told Radio Ambulante. Having arrived after the first rounds of Cuban doctors, who were received in Brazil to shouts of “slaves, slaves, slaves!” his cohort was instead received warmly. His salary and monthly stipend was also considerably better than the amount he received in Venezuela.

However, after his three year work contract had ended, Ramirez was accused of applying for an individual work contract and thus breaking all ties with the Cuban government. As a result, he was suspended from the programme, is now considered a deserter and has been banned from entering Cuba for 8 years. His subsequent request for political asylum saw him banned from working as a doctor in Brazil until he passes a reválida test which doctors who qualified out of Brazil are required to take in order to work.

Ramirez is not the only doctor who has turned its back on Cuba since being sent out of the country to work as a medical professional abroad. Fellow Cuban doctor Carlos Martinez, who arrived in Miami four years ago as a political refugee, spoke to south Florida radio station WRLN-FM about the issue.

“Cuba exploits the doctors as merchandise, y’know?” he said.

Indeed, the way in which the Mais Médicos system operates means that doctors have become some of Cuba’s most profitable exports, bringing in around $300 million per year.

Speaking about the departure of Cuban doctors this weekend, Bolsonaro reiterated the reasons for which he originally intended to change the Mais Médicos programme, deemed “offensive” by the Cuban government.

“We can not leave people in Brazil in a regime of semi-slavery, completely in violation of federal law,” he said.  “You can not confiscate wages, you can not alienate families. We have many Cubans who have families there in Cuba and have already set up new families here. This project destroyed families and we cannot admit it.”

Today, November 27, Bolsonaro added to his thoughts with a tweet. “After Cuba irresponsibly withdrew from Mais Médicos because they chose not to accept giving freedom and a full salary to their citizens, almost 100% of the vacancies have now been filled by Brazilians.”

Innovation in Lusophone Africa: could Brazil provide the boost it needs?