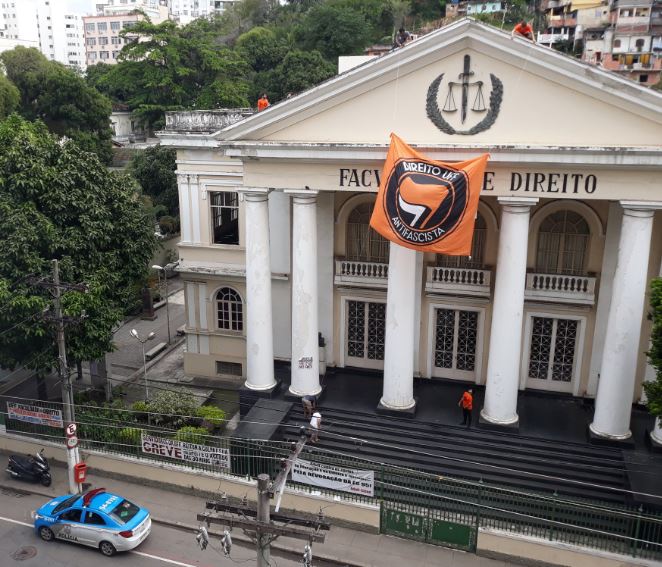 Although weeks have passed since Jair Bolsonaro’s electoral victory, public university professors are still reeling from attacks on the freedom of speech, including the removal of an anti-fascist banner from the legal faculty of Rio de Janeiro’s Universidade Federal Fluminense (UFF), which took place before electoral voting.

Brazil Reports spoke to UFF political sciences professor Carlos Henrique Serra about the incident – which led the university’s very own students to complain of ‘censorship’ – and what it means for the country’s state university system.

Having received reports of what they later deemed to be “anti-Bolsonaro political propaganda,” local judges authorised the entrance of inspectors from Rio de Janeiro’s Regional Electoral Court, along with military police, into the UFF campus to take down the banner.

However, according to UFF professor Serra, the entry that the judges authorised was illegal, “because there was no official nor judicial document to authorise entry,” as the mandate was only verbal.

The crime they had been sent to investigate was a banner that had been pinned up on the UFF building for the department of law displaying an anti-fascist symbol and reading “UFF Law – Anti-fascist.”

However, contrary to the judges’ evaluation of the banner as electoral propaganda, Serra pointed out that it was merely ideological expression.

Speaking to Brazilian newspaper Folha, the Brazilian Lawyer’sAssociation Ordem dos Advogados do Brasil (OAB) also maintained that “free expression should not be confused with electoral propaganda.”

“Anti-fascism is not party politics,” Serra agreed. “It expresses a vision of the world that is against…an extremely intolerant ideology, marked by hatred.”“What really happened in universities (not just the UFF) was a frontal, violent attack against freedom of expression, against university autonomy and free manifestation of thought,” he told Brazil Reports. “These attacks were unconstitutional because they violated constitutional rights established by the Constitution of 1988,” he added.

As public institutions, defending the autonomy of state universities is in the state’s interest, Serra pointed out. “They should personify plurality, diversity and respect for one another.” “Defending public universities is defending the possibility to preserve and guarantee the rights of the Brazilian population,” he said.

“[As state university professors] we respect the electoral results, but what they represent is – without a doubt – very worrying.”