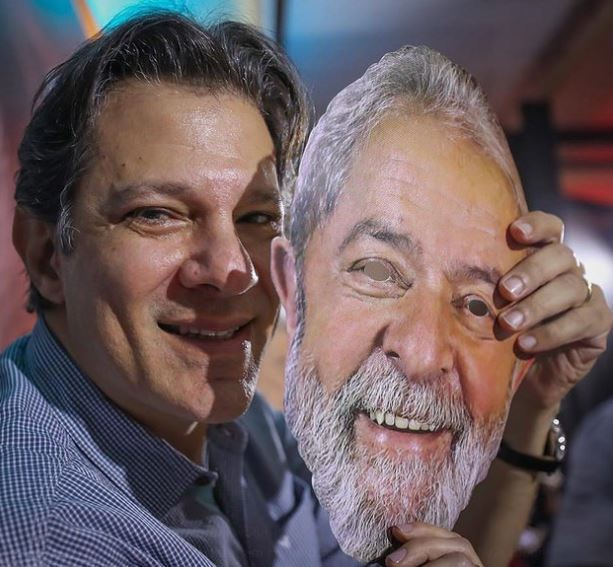 Although it remains unconfirmed whether Fernando Haddad will step up as Vice President and candidate for the PT (Workers’ Party), the first survey results including him as a presidential candidate have recently been published.

Public opinion and statistics institute IBOPE, the largest collector of information in Brazilian and Latin American markets, released the information yesterday, September 5, in the first public opinion study since ex-President Lula da Silva was banned from taking part in this year’s elections.

The main difference this time round revolves around the PT’s popularity. With Lula out of the race, likely replacement Haddad now finds himself with only 6% popularity as opposed to Lula’s 37% predicted percentage of voter support, when he was originally included as a candidate back in January.

However, according to local newspaper Estadao, Haddad has the potential to gain voter support in the Northeast of Brazil, where a third of the voting population declared their intentions to vote for him if he was to replace Lula. Forum magazine also reported an increase of 9% among those who responded “definitely” when asked whether they would vote for Haddad instead of Lula, since the first time IBOPE asked this question in August.

Right-wing Jair Bolsonaro remains firmly in the lead, representing the PSL (Social Liberal Party), with 22% of voter support. This figure represents a 2% increase from a previous voter survey carried out in August.

Two candidates who experienced no change in their positioning, however, were Green Party-allied Rede Sustentabilidade’s Marina Silva and centrist Podemos’ Álvaro Dias. These two steady candidates remained on 12% and 3%, respectively.

IBOPE interviewed 2,002 voters across 142 Brazilian municipalities from September 1-3. The margin for error is registered at 2% and 21% of voters outlined their plans to cast a ‘blank’ vote.

For more information on the presidential candidates and their parties, click here.

The latest survey results have been released amid allegations of corruption against two of the 13 presidential candidates, both taking place in previous political campaigns and within 24 hours of each other.

On Tuesday, September 4, likely PT candidate Haddad was accused of corruption, gang involvement and money laundering by São Paulo’s State Public Prosecution Service. The politician allegedly received a pay-off of $2.6 million reais from construction company UTC Engenharia in order to pay off a debt during his campaign for mayor of São Paulo in 2012.

Alckmin, on the other hand, has been subject to corruption allegations linked to the Lava Jato corruption investigation, in which he supposedly received $10.7 million reais from the infamous Odebrecht conglomerate.

Although it is unlikely these allegations will be processed until after the politicians’ campaigns, they could have an effect on their popularity among this elections’ voters.

Whilst both parties have denied allegations, Arko Advice political analyst Thiago de Aragão speaking to The Guardian, claimed that these sorts of allegations were not uncommon. “These types of allegations have been constant since Car Wash began,” he said. “Any politician who’s not a newcomer has received money from these sources.”