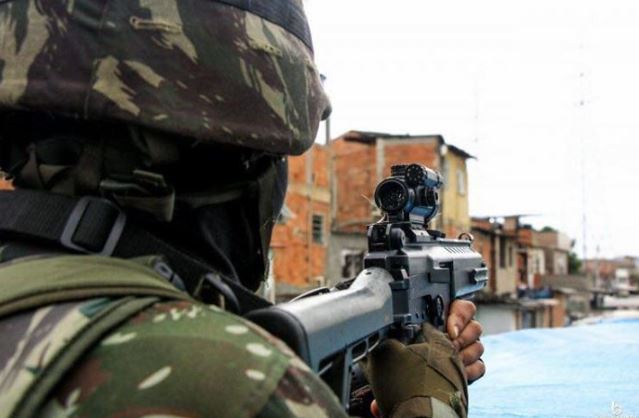 A security operation, which took place in the Maré communities of Vila do Pinheiro and Vila do João this Wednesday 20th June, has killed a total of seven people. Among them was 14 year-old Marcos Vinicius da Silva, who was on his way home from school when he was shot in the stomach. The teenage boy later died from his wounds in hospital.

The other six corpses are yet to be identified, however Rio’s Civil Police assures that they were suspects and not innocent by-standers like Marcos. According to the police body, reported in El Pais, the purpose of the operation was to carry out 23 arrest warrants and check information previously obtained by intelligence reports.

Armed policemen were on the hunt for those suspected of having assassinated inspector Ellery de Ramos Lemos, director of investigations at the DCOD (Drugs Combatting Police Station). Ramos Lemos died on 12th June from a gunshot to the head during an operation in Rio’s Acari favela. Both the Maré and Acari favelas are located in the city’s Zona Norte.

Marcus Amim, a delegate of Rio’s Civil Police Force, made a threatening statement on the TV Programme SBT Rio last week. “We are going to hunt the suspects,” he said, repeating the word ‘hunt’ several times, insisting they are all now “enemies of Rio de Janeiro’s civil police force.”

“You will pay for this. We are coming after you,” he said, lamenting the loss of inspector Ramos Lemos as a friend, insisting that his team’s plan is to seek out the suspects, wherever they are, at whatever time of the day.

Videos recorded by residents show helicopters repeatedly circling the Maré favela this Wednesday, firing shots from the air and generating panic amongst residents.

A community Facebook page for residents of the favela, posted at 5.30am on Wednesday 20th June, “how are we doing guys? Take special care those who live in tiled houses. Lots of shots coming from above.”

Later on that morning, administrators of the community Facebook page posted that the police were entering houses without warrants, warning people to take care and stay alert even during moments of apparent calm.

“Once again ‘security forces’ use helicopters to shoot from the sky downwards and put the lives of the entire Maré population at risk. We need a new security policy that respects residents’ rights,” said the organisation.

In a video published by newspaper O Globo, the mother of 14 year-old Marcos Vinicius da Silva, who lost his life this Wednesday, accused police forces of having murdered her innocent son. Holding up the bloody t-shirt he was wearing when he was killed, she pointed out the bullet hole in the material.

“Yesterday, my son lost his spleen, he lost his kidneys, he took bullets to the stomach and the shrapnel finished him off. I don’t have anything left to donate from my son,” she said, describing graphically the way he had died. “Yes, the State will pay for his burial, because it was this police homicide that lacerated the heart of another family,” continued Bruna da Silva defiantly, showing her son’s school backpack stained with blood.

Not-for-profit group Redes da Maré counted over 100 bullet holes in the ground after the operation. Speaking to the Guardian, 53 year-old Irone Santiago who works at the NGO and knew Marcos and his family, questioned, “What is our guilt? Because we are black, poor and live in favelas we have to die?”

This latest episode comes after spiking levels of violence in Rio and its favelas. Just last week, a shootout between gang members and Military Police in the Babilônia and Chapéu-Mangueira favelas, located in Rio’s Zona Sul, saw the temporary closure of the cable car that transports tourists up Sugarloaf Mountain, as well as local Santos Dumont airport.

Independent monitoring initiative Rio’s Intervention Observatory has calculated that 444 people were killed by police from February to May, which represents a 34% increase from last year.

Ahead of this October’s presidential elections, President Michel Temer remains under scrutiny for his February decision to place public security under Military Police control and the consequences it continues to have.