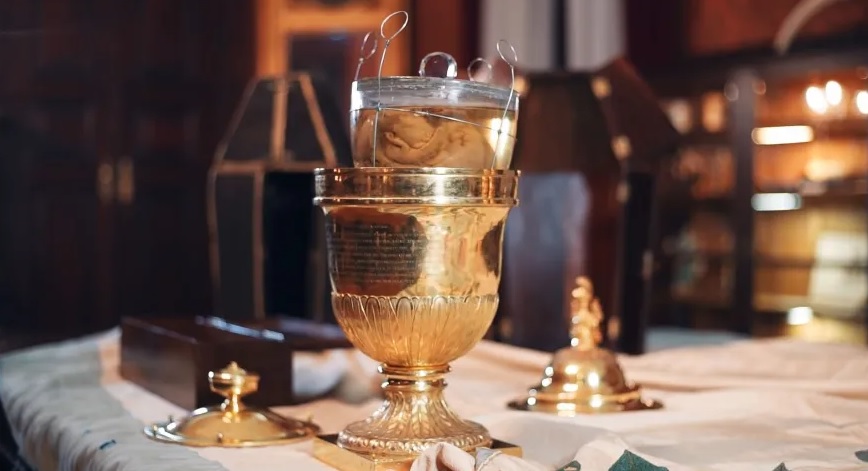 In a bizarre showing of patriotism, Brazil’s government has repatriated the 188-year-old embalmed heart of Emperor Dom Pedro I, who declared Brazil’s independence on September 7, 1822.

The emperor’s heart is on loan from Portugal and will be used to help celebrate the 200th anniversary of the founding of Brazil this September.

Out of respect for the memory of Dom Pedro I, the federal government treats the presence of the heart with the same State honors given to chiefs of other nations on visits to Brazil.

“The heart will be treated as if Dom Pedro I still lived among us,” said the Chief of Ceremonies for the Ministry of Foreign Affairs Alan Coelho de Séllos.

On August 23, the heart participated in a ceremony at Palácio do Planalto, the government headquarters, and was accompanied by President Jair Bolsonaro, first lady Michelle Bolsonaro, and other high-ranking officials.

The embalmed organ was met by Mr. Bolsonaro at the top of the ramp at the government headquarters, a meeting ritual usually reserved for heads of state from foreign countries visiting Brazil.

Independence or death: Who was Dom Pedro I?

Along with the rest of the imperial family, he arrived in Brazil in 1808 fleeing Napoleon Bonaparte. When his father returned to Portugal in 1821, Dom Pedro I assumed the Brazilian throne.

On September 7, 1822, he declared Brazil’s independence from Portugal and became the country’s first emperor. “Independence or death!” said Dom Pedro I on the banks of the Ipiranga River, in São Paulo at the time.

Hours before he died, in 1834 at the age of 35 from tuberculosis, the emperor asked for his heart to be removed from his body and taken to the city of Porto, where it has been kept on the altar of a church until this historic journey back to Brazil.

The rest of the emperor’s body was brought to Brazil in 1972, in celebration of the 150th anniversary of independence. Today, Dom Pedro I rests in a crypt in Parque da Independência in São Paulo.

A odd tour: The heart wants what it wants

This is the first time that the heart has left the city of Porto since being brought there centuries ago. In Brazil, it will be on display for the public until September 5 in Brasília.

The organ, weighing about nine kilograms (nearly 20 pounds), is exposed inside a glass capsule, kept in an air-conditioned room specially prepared for the occasion and under the surveillance of the Federal Police.

On September 7, the date of Brazil’s independence, the heart will be at an event, alongside other heads of state invited to the celebration.

“The arrival of the heart of D. Pedro I to Brazil will be an opportunity for the Brazilian people to honor a central figure in the process of Brazilian independence,” said the Ministry of Foreign Affairs in a statement.

The heart returns to Portugal on September 8. “The heart of our D. Pedro will be received with the honors of the head of state, and he will return with more recognition and admiration from the Brazilian people,” said Rui Moreira, president of the Porto City Council.