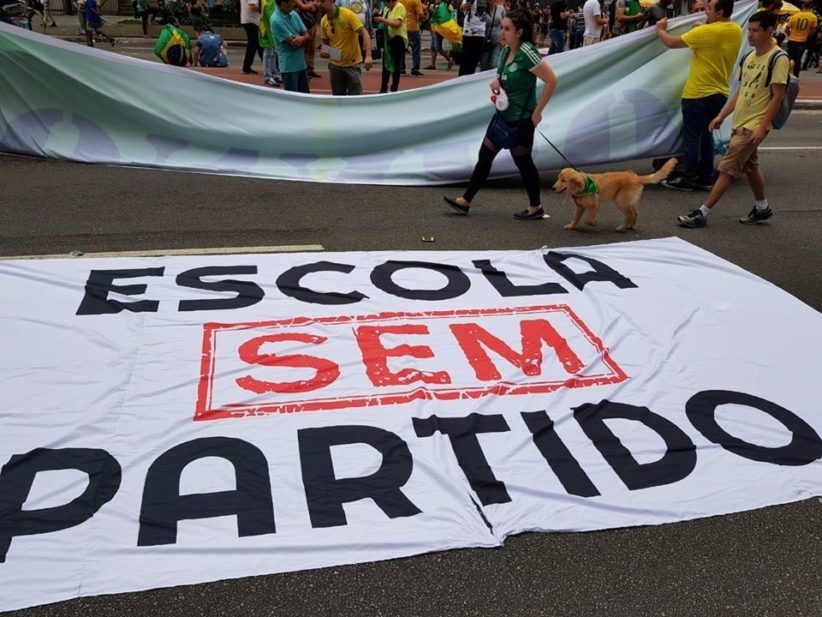 Jair Bolsonaro has been nothing if not a controversial president-elect, and his policies regarding education are no exception. Strongly backed by the Evangelist Church, the incoming president looks to carry out a complete overhaul of the educative system by cleansing it of “indoctrinating” influences.

“For a long time, our teaching institutions were taken over by harmful ideologies, by the investment of values and people who hate our [flag] colours and national anthem.”

El Pais reported that Bolsonaro tweeted this on October 28, just days after winning the Brazilian elections, although the tweet appears to have since been removed from his feed. Despite not taking office until January 1, schools and universities have already seen a hint of what is to come.

Students across the country have had the support of the right-wing politician to film teachers who are expressing leftist indoctrination or supporting early sexualisation of children in schools. For this, Ana Caroline Campagnolo, elected MP for the Santa Catarina state, created a channel on social media for students to denounce teachers who had “humiliated or offended their freedom of faith and conscience.” So far, 6 teachers have been reported for indoctrination on social media.

El Pais also reported that history teacher Jam Silva Santos was accused of indoctrination for showing a class Batismo de Sangue (Baptism of Blood), a film based on the book of religious and intellectual leftist Frei Betto about Brazil’s 1964-85 dictatorship. Although Santos had been showing this film for five years without any problems, he was criticised for expressing a veiled criticism of Bolsonaro, who has openly declared himself in favour of Brazil’s era under military rule.

A filmed debate between a pro-Bolsonaro student and history and sociology teacher Euclides de Agrela in a state school in Fortaleza was shown on Bolsonaro support pages. Agrela received death threats for her opinions and was unable to work for a few days, stating that she “lived in a climate of terror.”

Bolsonaro’s approach to education is based on his Escola Sem Partido “School with no party” plan, a project that he will take to government to avoid the mention of ideology and politics in school as well as removing words such as “gender” and “sexual orientation” completely from the curriculum.

Renowned educator and linguist José Fiorin spoke to Resumen Latinoamericano about the possible consequences of this kind of approach.

According to BBC Mundo, Bolsonaro’s other policies include a reduction in racial quotas for minority students, stating that education should be based on merit. As well as planning to massively increase the number of military schools in Brazil, he also stated a desire to bring back the subjects Moral and Civic Education along with Social Organisation and Brazilian Politics, which have not been seen in schools since the dictatorship period.

This era, which saw political opposition suppressed and freedom of speech stifled, may be referred to as the 1964 revolution (as it is currently called in military schools across the country) in order to divest itself of the negative connotations of “dictatorship.”

General Aléssio Ribeiro Souto has been named as Bolsonaro’s education consultant, and has raised eyebrows over his right-wing, religious stance towards schools in Brazil. He supports Bolsonaro’s wish to eradicate mention of gender and sexual orientation to avoid the “early sexualisation of children,” but has also made waves in his opinion as to whether creationism should be taught in schools.

“As far as I know it isn’t wrong [to teach creationism]. They were historical events that happened,” Souto said in an interview with Estadão. “If a person believes in god and has their stance, it’s not up to the school to try and change something like this, that is what ideologically-oriented schools want to do, change the opinion that a child has from the home. We need to mention creationism, and darwinism, but it’s not right to pretend that creationism doesn’t exist.”

Fiorin explained that if schools are required to teach what parents believe in, then school as an institution is lost, as there is no boundary between what is believed to be true and what has been proven to be true.

It’s an authoritarian concept of education,” added retired Universidad de Campinas professor Luis Carlos de Freitas to El Pais. “They think that any thought that is different to theirs constitutes a risk that should be combatted with discipline and repression. And, in combatting a possible ideology though imposing their ideas, they end up falling into the contradiction of promotive reverse indoctrination. It’s a step backwards.”

However, Bolsonaro has not yet taken office and the implementation of these new measures may be difficult to achieve. He will have to pass his plan through the National Board of Education, which is an organisation independent of the government. Current president Michel Temer named the directors of the board recently, meaning that Bolsonaro will have to wait two years before he can change those in charge. As well as this, the controversial measures will have to be passed through congress, although it is as yet unsure how much support School with no party will have across the country.