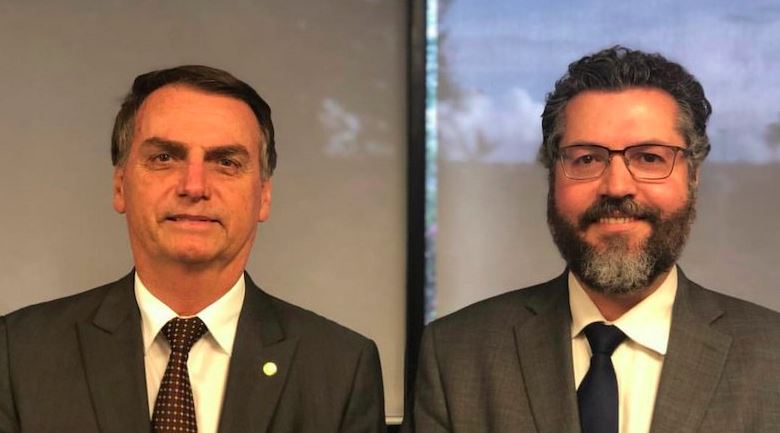 As President-elect Jair Bolsonaro’s political cabinet continues to fill out, his choice of ministers remains under huge amounts of scrutiny from all angles.

The most recent addition to his transition government, Minister of Foreign Affairs Ernesto Araújo, is no exception.

However, the former director of the Ministry of Foreign Affairs’ US and Canadian department has recently attracted attention for reasons unrelated to his diplomatic career. As opposed to Araújo’s recent promotion, interests are instead currently focused on the diplomat’s personal blog, entitled “Metapolitics: against globalism.”

In his biography, the civil servant and 51-year-old writer declares globalism “anti-Christian” and “anti-human,” claiming that its ultimate goal is to “break the connection between God and man.” Aside from his religious beliefs, Araújo also labels Bolsonaro’s principle opposition (the PT) a “terrorist” party.

One of his most discussed recent entries, however, goes by the title of “kidnapping and distorting,” in which Araújo talks about the environment.

“Over time,” reads his blog entry, “the Left kidnapped the environmental cause and distorted it over the past 20 years until it became paroxysm, with the ideology of climate change.”

“Climatism put together some data suggesting a correlation between the temperature increase and increase in C02 concentration in the atmosphere, ignoring any data that suggested the opposite, creating a ‘scientific’ dogma, which nobody can solve for fear for being excommunicated from a good society.”

“This dogma has been used to justify increasing the regulatory power of states over the economy and the power of international institutions on the nation states and their populations, as well as to stifle economic growth in democratic capitalist countries and to promote the growth of China,” he writes.

Come the beginning of next year, Araújo will represent the nation of Brazil, widely considered to be the most biodiverse country on the planet, many of whose species are at risk of extinction for reasons linked to the environmental effects of climate change.

Environmental concerns for Brazil under a Bolsonaro presidency are already at an all-time high. Despite backtracking on his intentions to leave the Paris Agreement and maintaining that the environmental and agricultural ministries will remain separate, the president-elect continues to surround himself with anti-environmental discourse.

Whilst his own son labelled global warming a “farse,” Bolsonaro himself told journalists in April this year that he believed deforestation was a consequence of population growth, UK newspaper The Guardian reported. The incoming president also intends to remove all indigenous land rights.

Eyebrows have also been raised over Araújo’s appointment as a result of a text he published in 2017 entitled “Trump and the West,” which has recently begun to circulate online again.

Over the course of the 31-page essay, Araújo praises US leader Trump, referring to him as somebody who represents “the recuperation of a symbolic past, of history and of the culture of Western nations.” “Trump’s vision is rooted in a long-standing intellectual and sentimental tradition…which shows that nationalism is inextricably linked to the essence of the West,” Araújo argues.

At the time of publishing, the text generated a strong impact on social media and fellow diplomats criticised his sympathy with Trump and nationalist vision. This time, reactions are now being directed at president-elect Bolsonaro, who has been likened to Trump on numerous occasions.

At a press conference this week, the new minister of foreign affairs highlighted the importance of “guaranteeing that this extraordinary moment Brazil is going through…translates into effective policy at the Ministry of Foreign Relations, into a policy that functions… in the interests of an active, happy and prosperous Brazil,” El País reported.