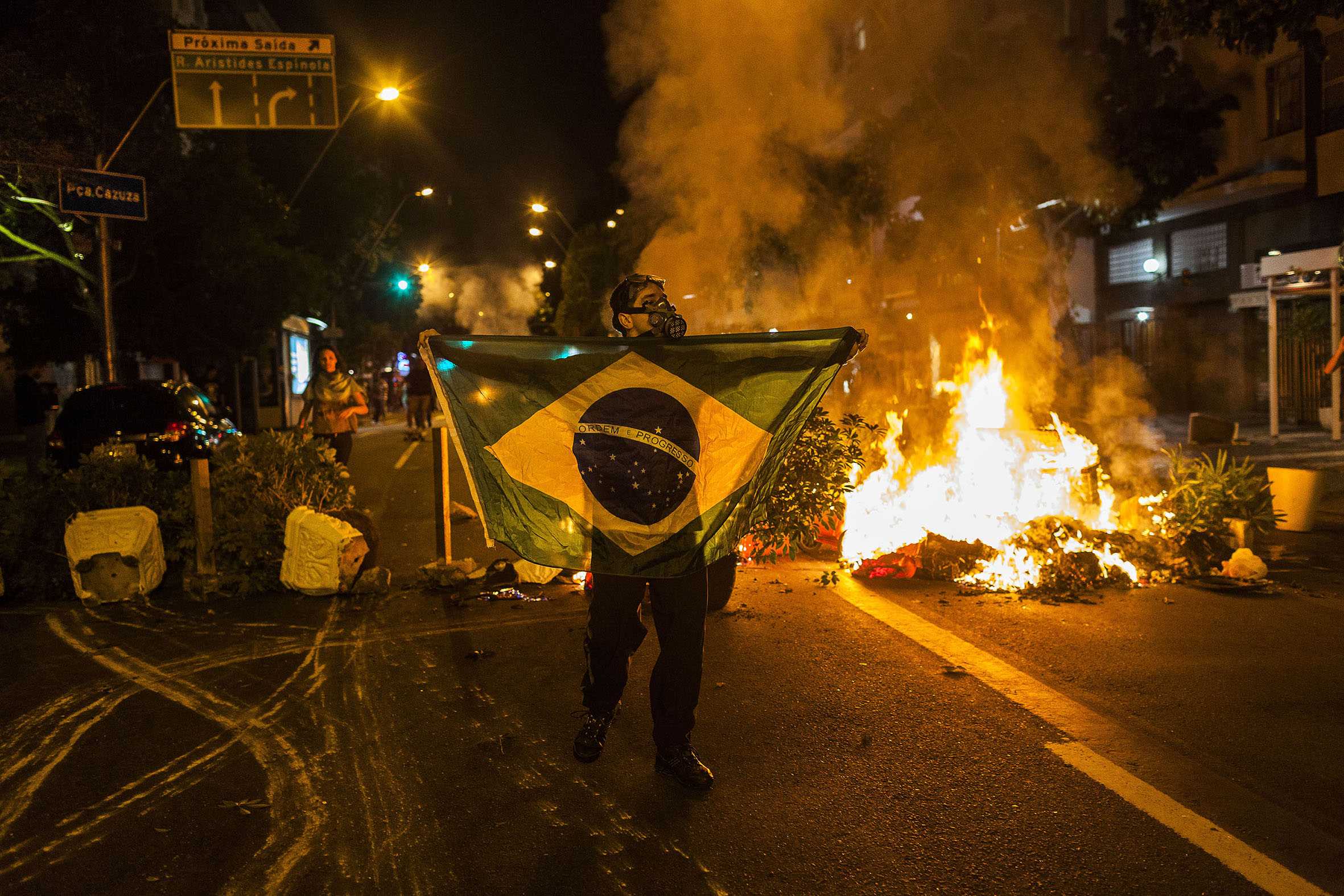 Ana Carolina Fernandes is a Brazilian photojournalist and documentary photographer. After training and working at some of Brazil’s largest newspapers, she decided to begin working as a freelance photographer. Since then, she has photographed everything from protests at some of Brazil’s most delicate political moments, to Rio de Janeiro’s transgender community, to the city of Havana, Cuba. Fernandes spoke to Brazil reports about her passion for photography, photojournalism and the role it plays within Brazilian mainstream media.

“I was always interested in photography…Cinema, images and journalism always played a large role in my family. My father owned a newspaper during the military dictatorship, my mother always put films on the projector in our house, my grandfather used to dub cinema, so the medium of images was always very present. At the age of 13 I first realised I was really interested when I was given a better camera. I used to take photos on family holidays.

“I then studied photography courses at Rio de Janeiro’s Escola de Belas Artes, which didn’t have a photography faculty back in the day. I interned at O Globo newspaper, and then at another newspaper, where I was always accompanied by another photographer. I then worked at a newspaper called Jornal do Brasil, which was like a school for me. It was a great newspaper for photography…I believe that with photojournalism you can only learn on the ground with lots of practice. I worked with great photographers who taught me everything I know. I learnt a lot in the streets by making mistakes and learning from them.”

What do you like most about the photo as a medium? What is special about it?

“Photos carry out the social role of reporting a crime, which I think plays a very important role in journalism, especially in a country with as much inequality and as large as Brazil. Often in Brazil, people don’t have access to information, or don’t have access to fair information. When it comes to reporting, therefore, photography can change small things such as personal stories or stories of a community. This can then serve to improve quality of life or to report an injustice or one of the many things that are wrong here in Brazil. For example, in the case of the disaster that occurred in Mariana two years ago, that until today nobody has been punished for.”

What do you most try to capture in your photography?

“Sometimes on the streets, a small detail can be really important to me, but maybe not to other people. Any detail, however unimportant, that a photographer sees differently can become really important.”

“On the other hand, when I am sometimes contracted by an agency, I have to follow a pre-established editorial stance. For example, before the (Rio) Olympics we did a big article about the pollution of Guanabara bay, and in that case, we had to listen to everyone’s stories and be very inclusive. I think having the opportunity to capture all angles and listen to all parties makes a good photo report.”

“But, when I am on the streets on my own, I try to capture the essence of the people… I try and look at things from a different point of view, which isn’t always easy. Street photography is sometimes made for things to happen without you expecting it. Sometimes when I go out I don’t take any photos, sometimes I just take photos on my phone – of a place I wasn’t expecting, for example – sometimes I take photos from inside my car, it depends.”

To what extent is it important for you to see beyond a particular editorial stance and tell a different narrative through your photojournalism?

“I think it’s very important, and nowadays, we have the opportunity to do so using social media. For example, when I was starting out as an independent photojournalist in the 2013 protests in Brazil, I was working for a branch of the agency Reuters on an article about fans in the FIFA Copa das Confederações. It was an almost corporate role…orientated towards a particular goal. It was difficult, and after a day’s work, I had to sit down, load and send all of my photos throughout the night. It meant I missed the first two political protests of 2013.”

“When it finished, I was crazy to go out onto the streets and live the political moment that the country was experiencing. It was a very important moment and lots of people didn’t really know what was going on. When I went out on my own, I started to take such playful photos, capturing such detail, and it was all because I had no commitment to anyone but myself.”

“Around 10 o’clock, by chance, a confrontation started between protesters and the police, and bombs started to explode. I thought to myself, my God, this is news. So, I started to take photos. At this point, I had been out of the world of photojournalism for a while, but there were hardly any other photographers present at that time of the night, so I decided to phone Reuters and ask if they wanted to publish my photos. I sent more playful ones, ones that resembled some sort of poetry, ones that were a bit different. The next morning, Reuters had put all of my photos up on their website. After that, I never stopped going out onto the streets to take photos.”

“It was at this point that I started to do more documentary photography, and I started posting my photos on Facebook. This was around 2013, when streaming was starting and Mídia Ninja (an online alternative news source) was first starting. So, I started posting my photos on Facebook and had an immediate response. People loved it because, a lot of the time, they were not aware of what was going on, even though big news channels such Globo News were supposedly broadcasting news all day. So, Facebook became a medium through which people could see the news through independent photographers. I posted so that people could see the other side of the news, the one not told by official media sources, because in Rio de Janeiro there is only one main newspaper and, truthfully, it relays very little information.”

So, do you believe in social media as the future of photojournalism?

“I saw all of this happening in 2013/14. One of the first times I posted on social media wasn’t because I was working for any newspaper, but because I had developed the habit of publishing my photos after working for 11 years at the newspaper Folha de São Paulo…I posted the photos I wanted, the way that I wanted.”

“I’m not sure how I managed to end up with so many followers: every day I have more followers and less likes! At the start, I just liked posting pictures from my phone for a bit of fun. Instagram put me as a verified user for a while, but I wasn’t sure about it. In the last few months I have done a few things to earn some money, but I’m not very inspired at the moment.”

Do you think that the Brazilian mainstream media reinforces certain race and gender stereotypes? Was your work with Rio’s transgender community an expression of this?

“I did the work I did with the transvestite community because I didn’t have a deadline and I could go deeper into the subject. I think it is very rare for Brazilian newspapers to publish more elaborate stories like this. Here in Brazil, everything seems very urgent and immediate, it focuses on the facts without going any deeper or questioning the beyond. The work I did I could never have done in a newspaper; it took me three years.”

Many people have commented on the racial stereotypes enforced by the media after the assassination of city councillor Marielle Franco, do you think photojournalism plays an important role in making Brazilian media less ‘white’?

“Without a doubt. One very interesting thing that has been developing for a few years here in Rio de Janeiro are photography collectives that are formed within the favelas. Thanks to these collectives, information is released from within the favela to the outside world, not from the outside-in. They know their own problems. Also, thanks to social media, there is no longer the need for you to use a newspaper as a means of publishing your work. I think this is very interesting because in Brazil a big problem, I think, is the fact that a lot of the newspapers are controlled by important families, oligarchies, who are often white and powerful. They control the newspapers, television and the radio in their states. In the USA, for example, this is forbidden.”

“For me, this is the biggest problem in Brazilian media. So, for sure, that the reaction on social media was an important part of Marielle’s death. Marielle died and 10 minutes later Facebook exploded, people didn’t talk about anything else. All of my friends, peoples’ indignation through social media, it was something very important that extrapolated, much more important than in any newspaper.”

“Here in Brazil there is a lot of division, people are for/ against Lula, they fight over social media and end friendships because of things like this. But, when Marielle died the reaction was unanimous. Social media, if it is used well, is very powerful, for sure much more powerful than any newspaper. And often this new generation isn’t even interested in reading the newspaper if it isn’t on the internet.”

Photojournalism is sometimes very dangerous: does this ever dissuade you from doing your job?

“The first day that Reuters bought my photos, I had gone out without a mask or a helmet! I have a lot of friends who don’t like it because it really is dangerous, but I like it. I like being out on the streets, but whenever I go back out onto the streets I always have to go back to the gym, I always say, you have to be very fit to be able to do this!”

“So, the truth is, no. I always try to go to protests with sufficient protection and in very dangerous moments I try to step back a bit because sometimes these places are very open. This year, a bit of shrapnel managed to get into my leg and it burnt me, leaving a big mark. There was also another occasion when we were reporting on the evacuation of a building, where policemen have hit me on the arm – they didn’t want us to get into the building at all. The Brazilian police are often violent with the press because, a lot of the time, they don’t want the press to do their job. So, sometimes they have to use force prohibit you from having access to certain scenes.”

Ana Carolina Fernandes plans to be on the streets again photographing the run up to this year’s presidential elections in Brazil. Follow her on Instagram to keep up to date with her work.