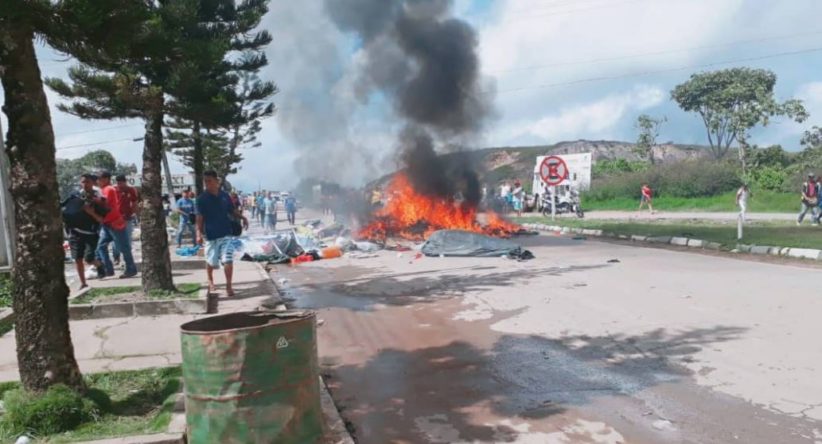 Brazil will step up its security presence in Pacaraima, in the northern state of Roraima that borders Venezuela, after residents attacked migrant encampments.

The attacks occurred on Saturday, August 18, after reports emerged that four Venezuelans had robbed and beaten a local merchant on Friday night. Groups of male residents armed with sticks and stones descended on the camps, chanting “Out, out, out! Go back to Venezuela,” whilst setting fire to the migrant’s tents and belongings. A video of the attacks shows one man using a bulldozer to destroy a migrant shelter whilst local residents watch and cheer. Residents also set fire to tires to block the only road crossing at the border.

The attacks, which began as peaceful demonstrations against the increased presence of Venezuelans in Pacaraima, quickly descended into violent raids on migrant encampments, reportedly forcing 1,200 immigrants to flee across the border or run to nearby hills whilst being chased.

In response to unrest, President Michel Temer has decided to send 120 more troops and extra police to Roraima, following a cabinet meeting this Sunday.

Over the past months, tensions have mounted between residents of Pacaraima and Venezuelans, many of whom live in nearby makeshift encampments. In past weeks, up to 800 migrants have arrived each day, placing immense strain on the state’s already limited social services and leading to increased crime, prostitution and disease, as well as rising xenophobia. The Brazilian government is maintaining its open-door policy for Venezuelan migrants, despite complaints from border community officials that the situation is unsustainable.

Venezuela’s economic free-fall under Nicolas Maduro shows no signs of improvement and the International Monetary Fund recently reported that inflation could reach 1,000,000% percent by the end of the year. The country is also experiencing chronic shortages in basic food and medicine.

Attempting to improve their economic situation, hundreds of thousands of Venezuelans have already migrated to cities and makeshift camps in Brazil, Colombia, Ecuador and Peru. The crisis is the largest in modern Latin American history and although most countries in the region have opened their doors to fleeing migrants, the mass exodus is now placing critical strain on states resources in the region.

The Ecuadorian government, who recently declared a state of emergency due to the amount of migrants entering the country, announced this weekend that they would shut the border for Venezuelans who arrived without a passport. Despite the new ruling, reports suggest that several migrants on foot have passed through the loosely guarded borders between Colombia and Ecuador .

Peru has also announced that from August 25, Venezuelans will be required to show a passport in order to enter the country.

The economic crisis in Venezuela is primarily a result of a radical decline in oil production – critical for the country’s export revenues – which today is at its lowest level for several decades.