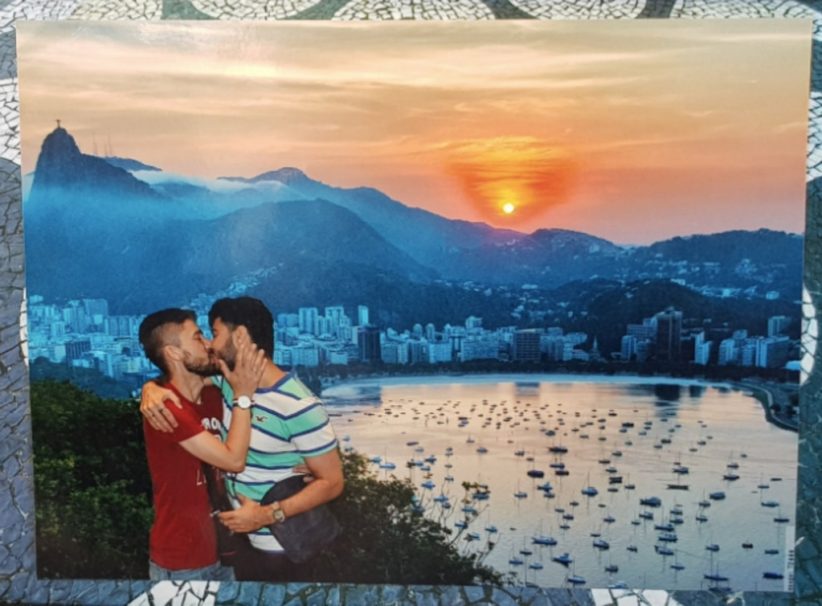 Image courtesy of The Intercept.

Rio de Janeiro is a city that does not fall short of photo opportunities. In fact, its cityscape is arguably among the most picturesque in all of South America. Naturally, the city’s backdrop is one of its strongest selling points and thousands of tourists take advantage of the chance to take the perfect holiday snap on a daily basis.

As a result, tourist photography services are big business in Rio de Janeiro. For those who want more than what they can get from just a selfie stick, most of the city’s main landmarks have a professional photography service, which is where Pedro Lotti’s story comes into play.

Lotti works at a photo point in Rio’s Sugarloaf Mountain, a tourist hotspot that receives almost 2 million visitors per day. Despite the beautiful backdrop it provides, visitors are also given the opportunity to pose in front of a green screen that places them against an automatically-generated scenic sunset overlooking Christ the Redeemer.

Part of Lotti’s job at the photo point is to make regular montages of all the photos in order to advertise the service. One day, however, Lotti chose a new and somewhat controversial photograph to take centre stage in the montage. The photo features two gay Brazilian men kissing.

Speaking to The Intercept, the employee claimed that he has since received all kinds of complaints about the photo being on public display.

“Unfortunately the large majority of people who react to the photo do so quite poorly,” he explained to the news outlet. “We get complaints every day. They typically complain, specifically, that the photo is in the line of vision for children, and are angry that their kids specifically have seen the photo.”

Despite not being gay himself, Lotti commented on the fact that roughly 70% of his colleagues are often discriminated against on this basis, meaning the photo represented an important opportunity to make a stand. He also highlighted how he had noticed it was commonplace for heterosexual couples to kiss in these types of photos, whereas homosexual couples were often reluctant to show the same types of affection, reported The Intercept.

This particular story highlights the split in attitudes towards the LGBT community in the city of Rio de Janeiro. On the surface, it seems like an incredibly accepting and open place, voted among the world’s most popular gay destinations. The city’s Gay Pride celebrations, for example, pull in figures of over 1.2 million visitors per year, making it the world’s largest parade.

In fact, back in May the LGBT community also celebrated an important victory as a national pact was established against LGBT phobic violence.

However, almost paradoxically, this news arrived in a context of unprecedentedly high numbers of violent deaths of members of Brazil’s LGBT community. Last year, for example, saw a 30% increase in numbers of deaths linked to sexual-orientation in comparison to 2016, meaning at least 445 were killed, reported The Guardian.

Speaking to the newspaper, Amnesty International executive director Jurema Werneck commented on the fact that homophobic speech is not criminalised in Brazil, claiming that “In the last decade Brazil looked to produce policies that could protect vulnerable groups like gay and trans people but they mostly failed, due to lack of investment or change in vision of policy.”

It is evident, therefore, that in reality, conservative attitudes remain entrenched in some echelons of Brazilian society and continue to cause problems to this day.

As Lotti pointed out, complaints about the photo largely came from parents and not their children, suggesting the split in opinion was generational: “Depending on how the parents respond, that determines whether the kids react positively or negatively,” he told The Intercept.

It is also necessary to take into account that Brazil is home to the world’s largest Catholic population, whose beliefs on the subject of homosexuality have considerable weight and influence among the people.

As it stands, if ex-President Lula is officially excluded from October’s Presidential elections, the second-most popular presidential candidate is right-winger Jair Bolsonaro, who has previously been called out for making LGBT phobic comments such as “if I see two men kissing in the street, I’ll hit them.”

In the case that Bolsonaro becomes Brazil’s next President, there is little optimism for a change in institutional attitudes towards Brazil’s LGBT community in the near future.