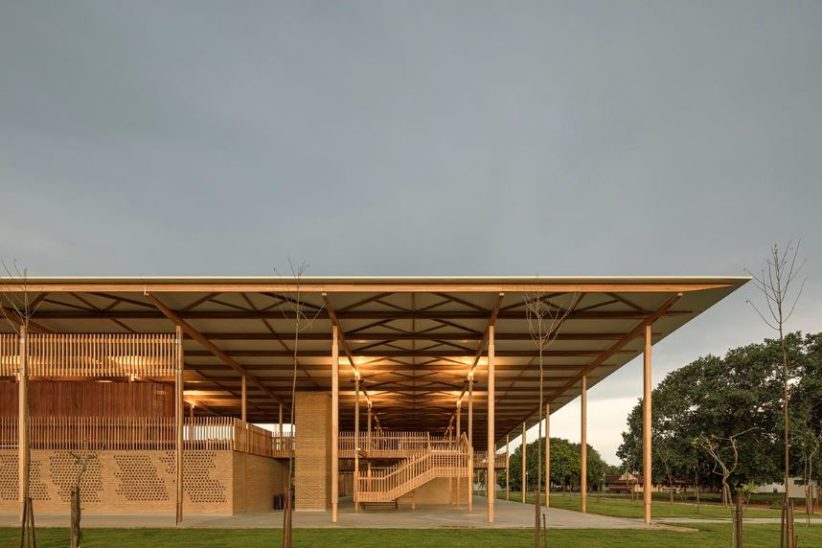 This year, the Royal British Institute of Architect’s (RIBA) international prize for world’s best new building has been awarded to a remote Brazilian boarding school made entirely out of wood.

Children’s Village, as the school’s new complex has been named, was pioneered by the Brazilian architectural group Aleph Zero and designer Marcelo Rosenbaum.

The Canuanã school is located in the central Brazilian state of Tocatins, lying adjacent to the northeastern state of Bahia. The school’s design and layout does its best to take into account the region’s soaring temperatures, which can sometimes reach up to 110 degrees Farenheit, or around 45 degrees Celsius.

Given its remote location in the agricultural region of Formoso do Araguaia, the school is for boarders only, who are often forced to travel long distances either by foot or by boat in order to reach the campus.

The complexity of the school’s geographical location also made the construction process more complicated, as transportation of materials and goods was extremely difficult. From start to finish, therefore, the building process was different from many.

Before any work began, the architectural team spent an extended period with the school’s 540 pupils, aged between 13 and 18, in order to get a feel and understanding for the students’ needs and expectations.

Overcrowding sometimes meant that up to forty students were forced to sleep all together in the same room, creating uncomfortably hot and stifling conditions.

Now, however, the school’s new structure means separate buildings for boys and girls, so that students can sleep comfortably in their 6-bed dormitories, complete with wooden bunk beds.

In fact, wood and timber from local eucalyptus trees constitute a large proportion of the building materials used in the construction of the new school, with many perforated to allow for natural ventilation. Thanks to the strategic decision to arrange buildings in small clusters, large patches of shade are created to ensure a comfortable temperature without any need for air conditioning.

Funding for the architectural project came from the Bradesco Foundation, which also supports another 39 rural schools across the country.

Speaking to UK newspaper The Guardian, the foundation’s director Denise Aguiar praised the effect the new campus has had on the school, “The girls are getting much more friendly with each other,” she said. “They told me they can now share their secrets, because they’re living in cosy groups of six, not 40. They enjoy spending time in their rooms, whereas the boys spend all their time playing games on their upper decks.”

Canuanã school’s new campus is the second architectural project in Latin America to receive a RIBA international prize, after Lima’s UTEC university won the award in 2016.