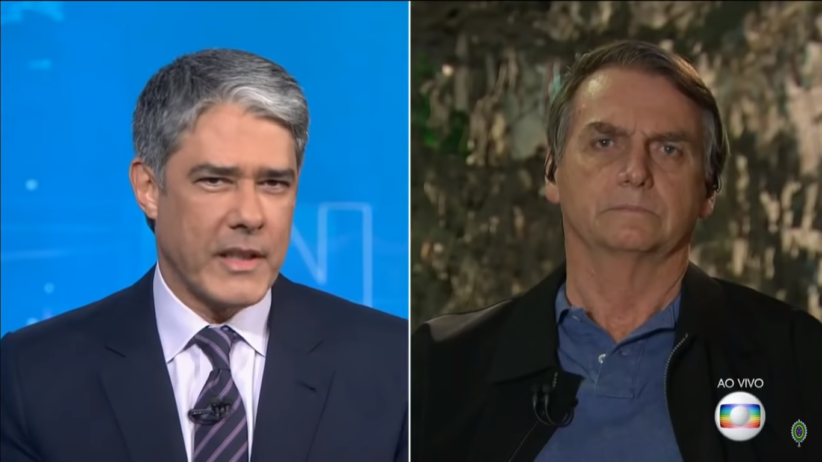 In one of his first interviews as president-elect, right-wing Jair Bolsonaro declared that the popular newspaper Folha de São Paulo “is over,” for implying that his presidential campaign was corrupt.

In his interview with William Bonner on the program Jornal Nacional, one of the highest rated news programmes in the country. Clarin reported that Bonner asked the president-elect if his comments about shutting down Folha represented a move away from freedom of speech.

“You have always declared yourself as a defender of the freedom of the press, but in certain moments, you have stated a desire that a newspaper stopped existing,” Bonner said. “As president-elect, will you carry on defending freedom of the press and citizen’s freedom to choose what they want to read, watch, and listen to?”

In response, Bolsonaro stated that he was “totally supportive of press freedom,” but added that “we have the issue of government-funded advertising, which is another subject.”

“I don’t want Folha to close,” he added, “but insofar as it concerns me, the shameful way in which it behaves means that it will not have resources from the federal government. Folha on its own is over. […] It has no prestige any more. Almost all of the ‘fake news’ that circulated against me came from Folha.”

Over the election period, Folha claimed that Bolsonaro had paid up to four million dollars for a WhatsApp campaign against his rival Fernando Haddad. However, the paper clarified on Tuesday that they had accused pro-Bolsonaro businesses of funding this campaign from the beginning rather than Bolsonaro himself.

The paper also published a story reporting that the president-elect had an unpaid worker in his summer house. Walderice dos Santos da Conceição was named as his aide in the house of representatives in Brasilia, even though she was known to sell açaí and work for Bolsonaro in his summer house. Bolsonaro took the interview as an opportunity to explain the situation.

“There is a lady called Walderice, a black woman who owned an açaí shop. Folha unfairly called her a ‘phantom aide.’ She was on vacation. Such actions, from a press outlet that commits injustices and doesn’t go back on them, I can’t consider that a good newspaper.”

In response to Bolsonaro’s comments on removing Folha’s governmental advertising, which is a large segment of the funding for newspapers across the country, many people have decided to take out paid subscriptions to support the paper. Businesswoman Marina Bragas told Folha that she took out her first subscription to the paper as a direct consequence of Bolsonaro’s comments and “to challenge the oppression of the elected government.

“I believe in the freedom of the press, although I think we need to improve a lot in this area,” she continued. “But attacking the media for criticizing the government or the then-candidate only harms our democracy. And the first step as citizens to support journalism and press freedom is to subscribe to media so they can continue their investigative and reporting work.”

There has also been strong support of this movement across social media, where many other are taking out subscriptions to allow Folha to keep publishing news.

Bolsonaro also stated in the interview that he will scrap or privatise the only remaining public TV channel in the country, TV Brasil, saying that it cost Brazil 300 million dollars a year. Instead, he expressed his approval of the Record television channel for showing “neutral journalism,” despite the fact it has been open in its support of the right-wing candidate. Record is owned by magnate Edir Macedo, the head of the Universal Church of the Kingdom of God, one of the largest pentecostal cults in Brazil and South America.

This interview introduced the public to some of Bolsonaro’s main policies that he hopes to pass, although many will have to be approved first in Congress when he takes office in January 2019.