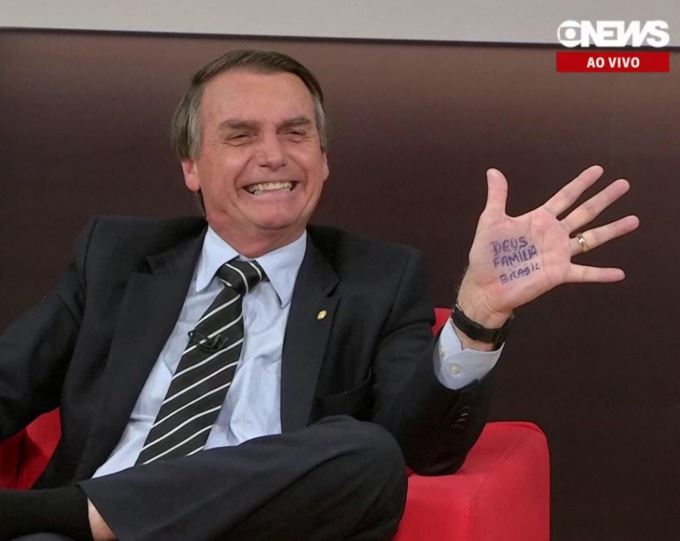 Local newspaper Folha de São Paulo has published an extract of a telegram sent by the Brazilian Embassy in Norway, detailing death threats made by presidential candidate Jair Bolsonaro against his ex-wife Ana Cristina Valle, who left the Brazil amidst a custody battle for their 12-year-old son that took place in 2009.

“Mrs Ana Cristina Siqueira Valle confirmed she left Brazil two years ago ‘having received a death threat’ from the father of her son. She put forward that this accusation could have motivated her request for political asylum in the country,” read the telegram.

The document also detailed Valle’s belief that the Brazilian Vice Consul who had been looking for her in Norway was acting on behalf of Mr. Bolsonaro, despite the fact that it is technically forbidden for the Brazilian Foreign Office to involve itself in personal affairs. Folha de São Paulo reported that the politician had put pressure on the administrative body.

By law, at the time, a child was only able to leave the country accompanied by a single parent provided they had been given permission by the other.

Having spoken to the Brazilian Ambassador at the time, Carlos Henrique Cardim, Folha journalists reported that he remembered receiving the contents of the telegram and confirmed that he took part in the investigation for Bolsonaro’s ex-wife.

“The Vice Consul communicated the information [about the death threats] to me,” he told the newspaper.

Although obtained through archives at Brazil’s Foreign Office, the document was made available to the Brazilian newspaper according to the Access to Information Act

However, the reaction from Bolsonaro’s ex-wife regarding the release of this information has been one of anger, “I want to dispel the lies that the dirty newspaper Folha de São Paulo has published,” she began, in a video posted online.

Mrs. Valle insisted that her ex-husband would “never” have threatened her life, “the father of my child, my ex-husband. He is very dear to me and to everyone,” she insisted, accusing the media of “trying to taint his image.”

“He is in first place in the polls… nothing will stop him from falling. He will become President!”

Insisting she was only in Norway for a holiday, Valle has been back in Brazil for some time and is currently running for a seat in the Rio de Janeiro congress and uses her ex-husband’s surname.

For his part, presidential candidate Bolsonaro has made no comment via social media and is still recovering in hospital after being stabbed during a Minas Gerais campaign rally at the beginning of this month.

This Saturday, thousands of women are due to protest against what they believe to be Bolsonaro’s misogynistic ideals, in line with the #NotHim movement.