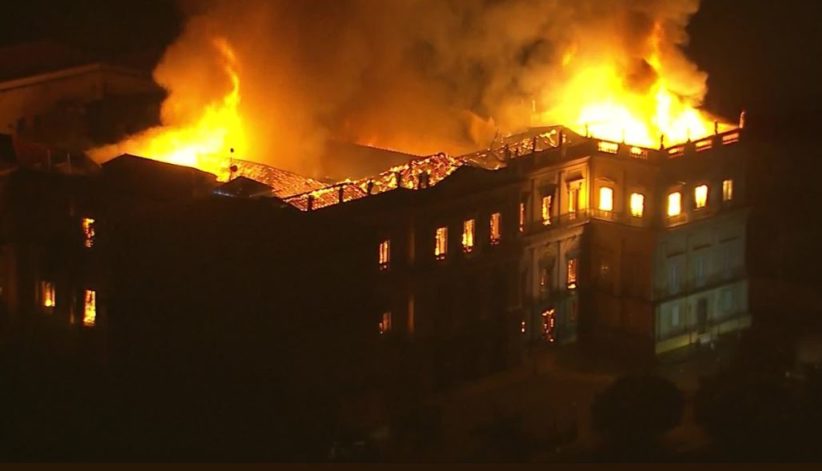 “An incalculable loss,” is the way that Brazil’s President Michel Temer described the blaze that burned through approximately 90% of the contents of one of Brazil’s most important museums.

Previously home to the Brazilian imperial family, the National Museum was considered the country’s oldest scientific institution, as well as an important research facility for students and academics. The museum celebrated its 200th birthday earlier on this year.

The National Museum held around 20 million relics, among them a 12,000 year-old skull named Luzia that was believed to be one of South America’s oldest fossils. So far, surviving pieces include the biggest meteorite to have been found on Brazilian soil, weighing 5,260 kilogrammes, as well as a library containing around 500,000 books, some of which date back to Portuguese colonial rule.

However, as the museum’s director Paulo Knauss pointed out, the archive was not only an important record of Brazilian anthropology, but also “fundamental for global history,” reported news outlet G1. Rio de Janeiro Federal University’s (UFRJ) Cristiana Serejo, vice-director of the museum, told The Guardian how the entirety of its egyptology collection had been lost to the flames.

The origins of the fire, which started around 7.30pm on Sunday September 2 after the museum had been closed to visitors, remain unknown. Federal prosecutors have ordered an immediate investigation into the causes of the fire in order to evaluate whether it was the result of criminal intentions or an accident. Neither injuries, nor deaths, have been reported.

Reports of firemen initially struggling to control the blaze were followed by comments from Rio fire department spokesman Roberto Robadey which pointed to the malfunctioning of hydrants closest to the museum. As a result, Robadey told the Associated Press that firefighters were forced to collect water from a lake close by, reported the BBC.

“200 years of work, research and knowledge were lost…It’s a sad day for all Brazilians,” tweeted President Temer, whose government many Brazilians are blaming for the disastrous consequences of the fire.

The museum was due to receive funding next month to improve fire safety measures as well as other renovations, according to CNN. However, not only were these plans implemented too late, but the museum had also been suffering the effects of budget cuts and reduced funding for years since the financial crisis, which its partner – state-run UFRJ –  suffered in 2016.

Speaking to news outlet Brasil Wire, Rio de Janeiro City Councillor Tarcísio Motta pointed out that, up until April of this year, the institution had received a mere $54,000 Brazilian reais in funding, equivalent to almost US $12,000.

Many have linked this lack of finances to austerity measures made by Temer’s government which have taken effect since he assumed the presidency in 2016, following the impeachment of ex-President Dilma Rousseff. Cuts to the education and culture sectors were made amid the funding of mega-projects such as the Rio de Janeiro 2016 Olympic Games, which saw some areas of the city experience a major revamp.

Rio’s futuristic ecological ‘Museum of Tomorrow’, for example, opened in 2015 at a cost of $215 million reais as part of a port reconstruction project that took place in the city’s central Praça Mauá ahead of the tourist boom during the Olympic Games.

Indeed, National Museum director Knauss articulated the lack of priority given to national pedagogy such as museums, claiming his “country is lacking policies that defend museums.”

Notably, Rede Sustentabilidade presidential candidate Marina Silva echoed his concerns, claiming that the fire was a “tragedy foretold” that had been caused by the financial shortages experienced by the UFRJ and other public universities over the last three years. The PT (Workers’ Party) and Rede are the only two political parties which have included policies for the protection of museums in their manifestos for this year’s elections.

Public anger at the loss caused by Sunday’s fire has seen demonstrations take place outside the museum’s gates, causing the police to fire tear gas and pepper spray at the amassed protestors. Crowds have included students as well as members of indigenous communities who are outraged at the government’s neglect of important academic, scientific and historic resources.

In the face of rising levels of violence and lack of security and economic crisis, Rio de Janeiro is showing all the signs of a city crying out for help.

As protests continue, Temer and his team met today, September 4 to discuss emergency response solutions, which the President then used his Twitter account to share with the public.

Of the three immediate response strategies, Temer’s government have firstly proposed that an interministerial management committee should be created in order to coordinate the reconstruction works. Secondly, he has also organised for a statute of $25 million reais, sponsored by the National Bank of Economic and Social Development (BNDES) to finance the implementation of safety measures for the protection of historical patrimony. Lastly, the creation of a provisional method of raising ‘patrimonial funds,’ which will eventually become a sustainable source of resources for museums, has been suggested.

Judges ban Lula from October’s elections, but he isn’t giving up yet