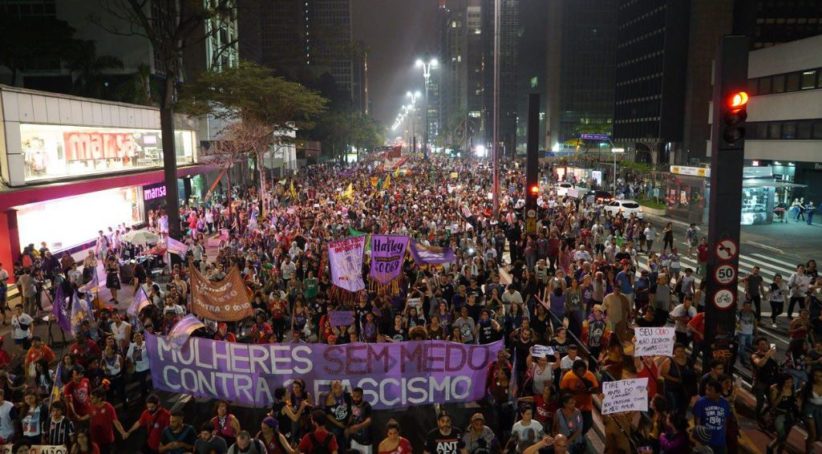 With five days to go until the first round of Brazil’s general election, it has been an eventful weekend for the country’s voters.

This Sunday, September 30, as right-wing presidential candidate Jair Bolsonaro was discharged from hospital having recovered from the stab wound sustained at a political rally, major protests took place across the country against him.

The #NotHim movement, which has seen women across the country mobilise in protest of his controversial opinions and beliefs, is his main source of opposition. This weekend, they took to the streets in what was the largest women’s protest in Brazilian history, according to the BBC.

News outlet G1 suggests that the demonstrations took place in 114 cities across the country, with the highest turnout occurring in Rio de Janeiro’s Cinelândia area and in São Paulo around Largo da Batata. Protests also took place outside of Brazil and around the world, in cities such as London, New York, Paris and Lisbon.

Although figures that show how many were present vary, those from Brazil’s El Pais (taken from feminist groups present at the protests) report the presence of around 150,000 demonstrators in the capital of São Paulo, where the largest protest took place.

“I am completely in favour of this movement that women have created against this fascist candidate,” 16-year-old student Felipe told the newspaper. “As well as defending my country, I am here to defend the rights of the women I love and who make up part of my life.”

Speaking to journalists at the BBC, Rio Grande do Sul Federal University professor Céli Regina Jardim Pinto described the recent activism and why it was important for Brazil. “What just happened was popularisation of feminism. It is spread throughout society.”

“#NotHim has become a message full of meanings,” she added. “This is very important in political struggle. It started with women…but has now expanded to include many things, such as defense of democracy and human rights.”

Those who marched this weekend were not just women, but also men, Afro Brazilians, members of the LGBTQ community and many more from a range of demographics across the country.

Despite unprecedented mobilisation against Bolsonaro, Bloomberg has reported that his support network among women has become even more intense, with graphs showing a jump in recent levels of female support.

Indeed, this weekend was also an opportunity to show support for the PSL candidate, as #EleSim, or #YesHim protests also sprung up in at least 40 cities throughout the country, reported G1.

Ahead of this weekend’s vote, Bolsonaro is steaming ahead with 31% popularity, 10% ahead of that of Lula’s replacement Fernando Haddad, who remains at 21%, according to the latest IBOPE survey. Their two rivals, Ciro Gomes and Geraldo Alckmin register around 12% and 8% of voter popularity respectively.

Why are Brazil’s entrepreneurs backing Bolsonaro?