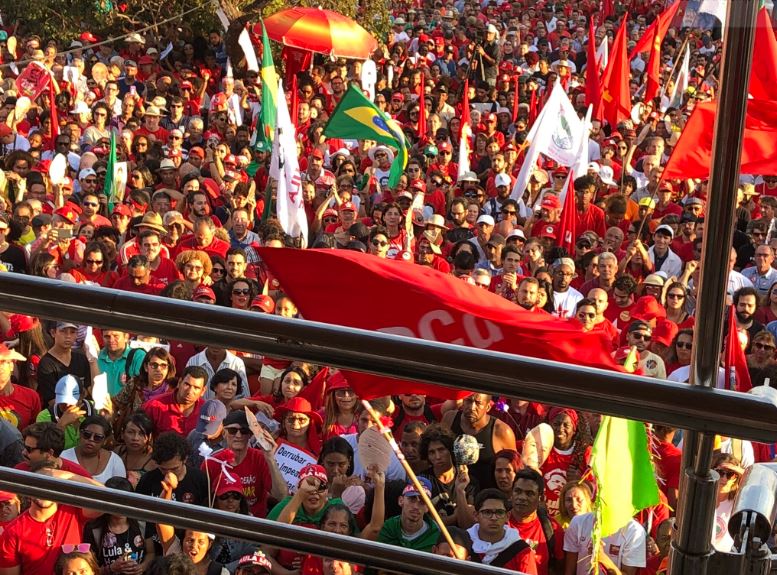 Yesterday, September 3, saw Lula da Silva meet with lawyers, as well as his closest PT (Workers’ Party) colleagues, to discuss what their next moves will be after Brazil’s Top Electoral Court (TSE) banned him from running for President this October.

The decision was made on Friday, August 31, after an exhaustive 12-hour court session saw judges vote to bar him 6-1. Their decision was based on the premise that the ‘clean slate law’ that bans candidates with previous criminal convictions from running for President.

After evaluating each candidate’s registration for the presidency, two hours were dedicated to discussing candidate Lula, as judges debated whether the court was under the obligation to consider the United Nations human rights committee’s petition to allow him to run for President until the early hours of Saturday morning.

The only minister to side with Lula was Edson Fachin, defending the UN appeal, on the grounds that courts are still processing legal appeals from the ex-President and that only once appeals are processed may the candidate be banned.

However, as public audiences watched on, six out of seven judges dismissed the United Nations’ panel recommendation, with the relator of Lula’s case Luís Barroso labelling the international organisation an “administrative body, with no judicial competence, made up of 18 independent experts.” Judges were therefore able to overrule the appeal.

“I never wanted this and if it was up to me I would have avoided that fate bring us here,” said Barroso, as he cast his vote for Lula to remain in prison.

Voted the most popular candidate at the start of this year, the former President of Brazil will now continue his 12-year prison sentence for corruption and money laundering.

Shortly after the court session was over, Lula’s party released a statement declaring their intentions to “keep on fighting until the end,” reiterating that the Supreme Court was under the obligation to consider the UN appeal under the conditions of the Non-binding Protocol of the International Pact of Civil and Political rights that Brazil signed with the UN in 1992.

Spokespersons for the PT also claimed that the court had brought forward the decision on Lula’s candidacy to before TV electoral campaigns began, claiming that this had been unnecessary. “There is one legal system for the powerful and a system of exception for the citizen Lula da Silva,” read the statement.

Speaking to The Guardian, constitutional law professor at the University of São Paulo Marcus Vasconcellos commented on the speed at which the decision had been made. “There is an issue of the speed of the judgment, it is not normal,” he said.

On hearing the court’s decision, Lula’s supporters across the country took to the streets to protest their discontent and to social media using the hashtag #LulaLivre or, #FreeLula. Demonstrations in support of Lula’s presidency have come to be known as Lulaços.

Bolivian President Eva Morales was among those who tweeted his support for the imprisoned president and disapproval of the court’s decision. “We reject this decision because it goes against democracy and the will of the Brazilian people,” he wrote.

The following Sunday saw Lula’s Vice Presidential candidate Fernando Haddad pay a visit to the politician’s hometown in the state of Pernambuco in order to rally support for the politician he looks to be replacing.

Speaking in Garanhuns, Haddad stated, “we are going to maintain our political position and morale regarding Lula’s candidacy. We understand that maintaining the same stance we have had for a year is a question of respecting popular sovereignty.”

Haddad has since paid a visit to Lula in prison, after which he confirmed that the PT would do “everything in its power to ensure the Brazilian people can freely choose their President.”

Since the visit, however, it has been confirmed Haddad is still not the acting head of the party and thus not a candidate, yet. Lula, on the other hand, insists there is still more to be done in order to convince the TSE to reconsider his candidacy before the first round of voting on October 7. Indeed, his lawyers have recently sent another petition to the UN Human Rights Committee, asking that his political rights are not restricted.

However, according to news agency Reuters, former mayor of São Paulo Haddad is expected to announce his presidential candidacy within the next few days, despite being charged with corruption by state prosecutors just today. Notably, even if these investigations advance, they will have no impact upon his candidacy.

In view of October’s elections, however, difficulty for the PT will lie in rallying sufficient support for Haddad as opposed to Lula, a campaign which has started considerably later than most.

Regardless of who will run for President, however, both have the same outlook and plans for the country, “We want to rescue Brazil,” Haddad Tweeted. “Rescue the areas of prosperity. Reclaim the plan for economic development to include all Brazilians,” he said, echoing ex-President Lula’s plan of action.