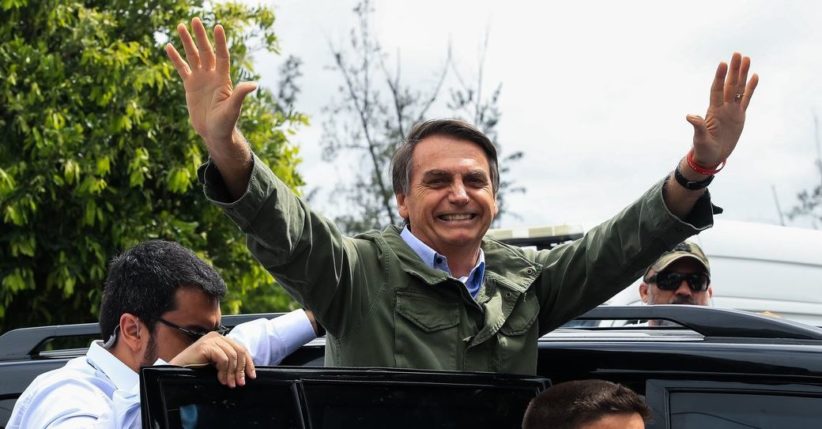 Geographically speaking, whilst the north-east of the country voted almost exclusively for Haddad, Bolsonaro received much of his momentum from a voting demographic in Brazil’s major cities, as well as in the south of the country.

Blank and null votes constituted 9.5% of those counted and there were 31 million abstentions, equating to 21.3% of the voting population. In Brazil, given that it is illegal to not cast a vote without legitimate reason, those who chose not to will receive electoral fines.

Yesterday’s results proved that the pre-election opinion polls conducted by research institute Datafolha, which predicted Bolsonaro 56% and Haddad 44%, were almost entirely correct, despite widespread accusations of inaccuracy and fake news.

Brazil’s president-elect is a former military general who has since served 27 years as a congressman. A member of the PSL party, his far-right opinions and comments have offended and caused concern for many members of Brazilian society, including women, Afro-Brazilians, the LGBT community and indigenous population.

Having previously admitted his nostalgia for the country’s 21 years of military dictatorship – during which he served in the army – claiming they “should have killed 30,000 more,” Bolsonaro has explicitly also stated his pro-torture stance.

Why did a majority vote for Bolsonaro?

A large factor in encouraging Brazilians to vote Bolsonaro is a deep-seated hatred of the PT (workers’ party) whom many blame for the economic and social problems that currently plague Brazil, UFF political scientist Carlos Serra told Brazil Reports in a previous interview.

Widespread resentment of the PT, the party that has governed Brazil for 13 of the past 15 years, stems from the economic difficulties that began during the presidency of Dilma Rousseff. Rousseff was subsequently impeached for the manipulation of public finances, amidst corruption scandals involving the construction giant Odebrecht.

Many also believe that Bolsonaro will be the man to turn Brazil around from the depths of its worst-ever recession, as well as a deeply troubling public security crisis and the dire approval rating of current President Michel Temer, which stands at 2%.

The unfolding of this year’s elections is also a factor which cannot go unnoticed. Since the imprisonment of ex-President Lula da Silva – who was originally predicted the most popular candidate – the electoral period was dramatic from the start.

Famously, president-elect Bolsonaro was also victim of an assassination attempt in early September that saw his popularity ratings shoot up. After a brief recovery period, Bolsonaro then took to social media to build on his loyal following, using live broadcasts to communicate with his voters, which strategically turned out to be one of his biggest advantages.

What dissuaded Brazil from voting for Haddad?

Aside from the obvious factor which meant he arrived significantly later to the electoral race, Haddad faced several challenges throughout his campaign period as Lula’s replacement. The first involved representing Lula’s political ideology and maintaining the voters that would have voted for him had he been a candidate, and the second, deconstructing the distrust of the PT. For many, his largely unsuccessful term as mayor of São Paulo also dissuaded them from putting their faith in him as a presidential candidate.

Having admitted that he “doesn’t understand” economics, Bolsonaro has been vocal about the appointment of his economy minister, banker Paulo Guedes, to whom the president-elect intends to hand over the management of all financial matters.

His plans to lower inflation, reform the country’s long-standing pension system and seek bilateral trade deals have been extremely popular among Brazil’s entrepreneurs and businessmen.

What earned him the most votes, however, were his proposed public security policies that are intended to tackle the surge in violence on the streets that many voters want to change. Bolsonaro has proposed for looser arms laws, giving citizens the right to carry weapons and use them for self-defence. Another constitutional change he intends to make will give impunity to police forces in the event they might be required to kill a civilian and ensure that they are not prosecuted for any crimes committed.

Bolsonaro’s Vice President, retired army general Hamilton Mourão, has also hinted at plans for the pair to re-draft the 1988 constitution, formulated after Brazil’s military dictatorship had ended. His nostalgia for the dictatorship era has also been seen in proposals for the creation of military academies in the capital of each state.

Other notable policy proposals include the tightening of Brazil’s borders and creating refugee camps for Venezuelan migrants, as well as ending all concessions for indigenous lands.

What does Bolsonaro’s victory mean for Latin America?

With Brazil’s democracy little more than 30 years old, political scientists such as Harvard University government professor Steven Levitsky are concerned that under a Bolsonaro presidency, it could be at risk again.

Speaking to the BBC in a recent interview, Levitsky warned that Latin Americans should be worried. “Brazil is an influential country. The last time that democracy died in Brazil, in a military coup, it helped to trigger, or at least encourage, a wave of military coups across Latin America,” he said.

Upon discovery of his victory yesterday, the president-elect congratulated the Brazilian people, thanking them for their support via a Facebook live broadcast, whilst they took to the streets in celebration and watched military parades go by. He promised to defend reforms, freedom and democracy.

Soon after, Bolsonaro then tweeted to let his followers know that he had received a call of congratulations from US President Donald Trump.

Today, October 29, the president-elect has thanked rival Fernando Haddad for his wishes of good luck. On Twitter, the runner-up wrote “I wish him success, Brazil deserves the best.”.